Government accused of failing to deliver on homecare promises 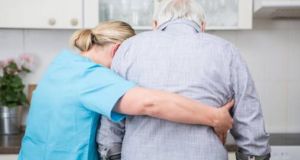 The HSE said that as of the end of October, 14,550,922 home support hours were delivered nationally to 51,404 people. Photograph: Getty Images

The Government has “failed” to deliver on its promises, Fianna Fáil has said, after new figures show the HSE is behind its target for the provision of homecare services.

According to figures released to Fianna Fáil’s spokeswoman on older people Mary Butler in response to a parliamentary question, the Government was 391,000 hours behind its target of 14,942,551 home support hours up to the end October.

Ms Butler said the figures show that the Government has “so far failed to provide” the additional 800,000 hours promised by a HSE service plan.

“If the target for 2019 is to be reached then an additional 200,000 hours will have to be provided through November and December,” she added.

The HSE figures also show that there were 7,881 people waiting for homecare support in October, 30 per cent higher than the 6,048 people waiting in February.

The number of people waiting for funding for the service also varied locally and regionally.

Two of the Dublin local areas have no waiting list at all, while four have reduced the numbers waiting since February. However, Dublin North West has the longest waiting list in the country, at 886.

“Outside the capital my own county of Waterford has seen proportionately the biggest increase, going up almost 700 per cent from 31 to 244 in eight months. There have also been big increases in Limerick, Tipperary, Longford and Westmeath,” Ms Butler said.

“It is clear that the million extra homecare hours promised by Budget 2020 cannot come soon enough, although given the failure so far in 2019 to meet targets I am not sure I trust Fine Gael to actually deliver them.”

“The level of home support provided by the HSE is significant; in 2019 more than 17.9 million home support hours will be provided to 53,000 people at any given time – plus 360,000 hours through intensive homecare packages for 235 people,” a spokeswoman for the HSE said.

The spokeswoman added: “Throughout the winter period an additional circa €2 million funding has been allocated for the provision of additional home support to support people being discharged from hospital or to prevent hospital admission.”

The Department of Health is currently engaged in a “detailed process” to determine what type of homecare scheme is best for Ireland, which will include an examination of the the best way to fund and regulate the service.

Level 5 extended until March 5th while officials consider ban on all non-essential travel into State 17:17
Independent inquiry to examine mother and baby homes in North 17:15
Pat Kenny ‘taken aback’ by scale of nursing home planned for site next to his home 16:54
Coronavirus: Northern Ireland reports 16 further deaths 16:46
Target to have all adults vaccinated by September ‘contingent on deliveries’ 16:38