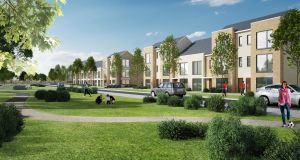 More than 1,000 homes have been granted permission in south Dublin in what will be the first large-scale housing development on local authority lands in more than a decade.

An Bord Pleanála has granted permission for 1,034 houses and apartments at South Dublin County Council lands at Kilcarbery in Clondalkin. The site, located between the N4 and N7, will include 310 social homes.

The housing will be developed as joint venture between the council and Adwood Ltd, a consortium of established Dublin builders Adroit and Maplewood.

The planned scheme resulted in protests last year over the inclusion of 70 per cent private housing in the deal with Adwood. However in October 2018 councillors narrowly approved the plan, by 20 votes to 16, following warnings from the council management that the land would remain undeveloped for a number of years if the deal was scrapped.

Under the deal Adwood will pay the council €38 million and will deliver the 30 per cent social homes at what the council says will be “competitive rates”.

The project will be the first kind under the “major urban housing” sites programme initiated in November 2016, as part of Government’s Rebuilding Ireland project, which sees State funding used to provide infrastructure to service large-scale housing sites.

Under this scheme, which saw €2 million of State funding at Kilcarbery, Adwood has committed to provide 50 homes at discounts on the market value.

O’Devaney Gardens, in Dublin City Council’s area, was to have been the first development under the major urban housing scheme. However, delays in the project, including protests over the amount of private housing to be built on the site close to the Phoenix Park in Dublin 7, meant the deal with developers Bartra was only approved by city councillors last month.

The Kilcarbery site will be developed over the next four years. The 724 private homes will include a range of three and four-bed houses as well as one, two and three-bed apartments. The tender also includes an 847 sq m community building which will be handed over to the Council. A creche and retail unit will also be included as part of the development.

The site is close to Grange Castle Business Park, Grange Castle Golf Club and Corkagh Park, which is one of Dublin’s largest parks covering over 290 acres.

The Kilcarbery development is part of the council’s €1 billion investment plan for building 4,500 new homes in the area in the coming years.

“We must now get on with commencement on site at the earliest opportunity and look forward to the development of this new community.”

Local authorities had previously been involved in joint ventures with developers to build housing on council land under the public private partnership (PPP) process. However, this process collapsed in 2008 with the advent of the property market crash leaving several major sites undeveloped.