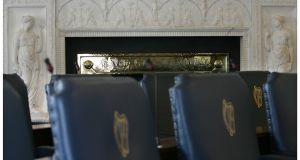 The Jewish Representative Council of Ireland plans to write to every member of the new Dáil and Seanad to highlight the risk of anti-Semitism. Photograph: Alan Betson/ The Irish Times

The Jewish Representative Council of Ireland plans to write to every member of the new Dáil and Seanad to highlight the risk of anti-Semitism in public debate.

The move comes in the wake of controversy surrounding tweets by newly elected Sinn Féin TD Réada Cronin for which she has since apologised.

Ireland is not immune to the international phenomenon of anti-Israeli rhetoric turning into anti-Semitic abuse, according to Jewish council chairman Maurice Cohen.

“A little education on what constitutes anti-Semitism would go a long way to correcting this problem. To that end we would urge Sinn Féin and the other political parties to adopt the International Holocaust Remembrance Alliance [IHRA] working definition of anti-Semitism,” he said after Sinn Féin had last week moved to draw a line under the affair.

The British Labour Party has in recent years been beset by allegations of anti-Semitism, in part due to a reluctance of certain sections of Jeremy Corbyn’s party to fully accept the IHRA working definition.

In a number of now-deleted tweets, Ms Cronin claimed that Israel’s foreign intelligence agency was responsible for Labour’s defeat in the UK general election. Responding to a tweet which dismissed her view as conspiratorial, she said: “When the Nazis come back, and they’re on the march, it’ll be Jeremy Corbyn will stand with you. You are a disgrace to your forefathers.”

Other tweets of hers asserted that Mossad’s alleged actions were “blatant as f***” and that Mr Corbyn was a “principled man” who was a victim of “lies, deceit, fake news, and the sinister activities of the Mossad Secret Service”.

Ms Cronin described her tweets as “throwaway remarks” and apologised “unreservedly and wholeheartedly” for them. Sinn Féin finance spokesman Pearse Doherty said the comments were “not acceptable”, while party president Mary Lou McDonald said she hoped to meet the Irish Jewish representatives. She added Sinn Féin “condemned all racism and bigotry”.

Mr Cohen said the term Nazism was bandied about in Ireland without people knowing “that it was, amongst other things, the premeditated, industrialised slaughter of six million Jews and many others who didn’t suit the Nazi regime”.

So much anti-Semitism today stemmed from the conflation of Jews and Israel, he continued. “In fact many Jews criticise the Israeli government in one way or another and among the most critical are Israelis themselves.”

Mr Cohen said he planned to send copies of the IHRA working definition to every TD in the new Dáil and to all new senators once the Seanad elections had taken place. As Ireland was already a signatory to the IHRA, “we have ‘de facto’ accepted it. It is now up to our politicians to adhere to it”, he said.

The IHRA definition reads: “Anti-Semitism is a certain perception of Jews, which may be expressed as hatred toward Jews. Rhetorical and physical manifestations of anti-Semitism are directed toward Jewish or non-Jewish individuals and/or their property, toward Jewish community institutions and religious facilities.”

A guide accompanying the text states that “manifestations might include the targeting of the state of Israel, conceived as a Jewish collectivity. However, criticism of Israel similar to that levelled against any other country cannot be regarded as anti-Semitic”.

It continues: “Anti-Semitism frequently charges Jews with conspiring to harm humanity, and it is often used to blame Jews for ‘why things go wrong’. It is expressed in speech, writing, visual forms and action, and employs sinister stereotypes and negative character traits.”

Other manifestations include “accusing the Jews as a people, or Israel as a state, of inventing or exaggerating the Holocaust”; “accusing Jewish citizens of being more loyal to Israel, or to the alleged priorities of Jews worldwide, than to the interests of their own nations” and “denying the Jewish people their right to self-determination, eg, by claiming that the existence of a State of Israel is a racist endeavour”.

The text, which is non-legally binding, was adopted in May 2016 at an IHRA plenary session in the Romanian capital Bucharest.

In June 2017 the European Parliament passed a resolution calling on member states to adopt this IHRA definition of anti-Semitism “in order to support the judicial and law enforcement authorities in their efforts to identify and prosecute anti-Semitic attacks more efficiently and effectively”. A similar resolution was adopted by the EU Council of Ministers in December 2018.

The IHRA, known until January 2013 as the Task Force for International Cooperation on Holocaust Education, Remembrance and Research, was founded in 1998 to strengthen, advance and promote Holocaust education, research and remembrance worldwide. It has 34 member countries including Ireland, which joined in 2011.