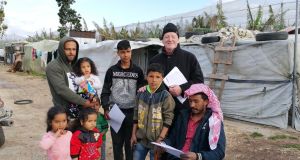 A Dublin priest working with Syrian refugee children in Lebanon has urged people not to lose sight of the impact of the coronavirus crisis on the world’s displaced people.

“The situation is critical, all NGOs are gone. People are starving,” Fr William Stuart has told parishioners in Dalkey, Co Dublin, where he had previously served.

“Like everywhere else we are in lockdown in Lebanon,” the effect of which on the refugee population was “drastic”, he wrote in a stark message last month.

“All the NGOs have gone to ground and are ‘working from home’ with the result that refugees are receiving no aid.”

From Clontarf in Dublin, Fr Stuart (59) is a Rosminian priest and works as a volunteer with Insan, a Lebanese NGO, in the coastal city of Tyre, as well as in the refugee camps. He has had an involvement with the Middle East since 2003, as well as serving in Dublin.

In 2018, he set up a school in Tyre “to get street kids who are long-term out of school into some form of learning”. They teach 54 children aged eight to 17, and while the building has been closed“we have been distributing worksheets three times a weeks in Maths, Arabic and English”, he told The Irish Times.

They have also been providing basic supports to students and their families with “a food hamper of dry goods weekly and rent support where eviction is being threatened”.

He said: “I have taken the view that as an NGO we are frontline people who don’t have the luxury of ‘working from home’ nor can we abandon the most vulnerable in this most difficult of times. To my disappointment this view is not shared by the NGO sector who have wholescale abandoned ship.”

The most urgent need among the refugees was for food, he said. “With no sign of aid agencies and the body politic only helping the Lebanese, things are not good.”

Fr Stuart felt very reluctant to ask for help at this time. “With 22 per cent cent unemployment in Ireland it is almost immoral,” he said, “but anything people can contribute would be very helpful.”

Anyone who wants to support Fr Stuart’s work can contact him at stresa2@gmail.com