Stipulations include being a ‘good customer’ for European plane-maker Airbus, and a revamp of loss-making services within France 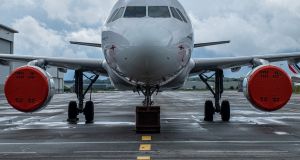 Protective covers on the engines of a plane operated by Air France-KLM at Blagnac Airport in Toulouse, France. Photograph: Balint Porneczi/Bloomberg

The carrier obtained a state guarantee and a subordinated shareholder loan, a financial life line executives said was needed for its survival in the face of a collapse in revenue due to the coronavirus pandemic that has pummelled the global industry.

Since unveiling the bailout the French government, which along with the Netherlands holds a stake in Air France-KLM, has mapped out conditions for the funding. Stipulations include being a “good customer” for European plane-maker Airbus, which is also struggling, and a revamp of loss-making services within France.

“There will be an elimination of domestic routes,” Mr Le Maire said on Monday on France-Inter radio, adding that the state aid was tied to “Air France becoming the company that most respects the environment”.

The French short-haul network links regions with daily flights from 31 airports including cities like Bordeaux and Lyon, in competition with TGV high-speed trains.

The minister said where there was a train service of under 2½ hours, flights “aren’t justified” and will be permanently scrapped. “The cost in terms of carbon emissions is too high.”

Air France-KLM shares fell as much as 6 per cent, bringing the drop since the start of the year to 56 per cent, giving the carrier a market value of €1.9 billion.

Governments are planning to shower billions of euro of aid on airlines across the region after the virus outbreak virtually halted travel. The Netherlands is also readying a bailout package for Air France-KLM. Deutsche Lufthansa, the region’s biggest carrier, is working on a rescue from Germany and other countries. Italy wants to take over bankrupt Alitalia.

In its decision on the air package the European Commission said France had demonstrated that all other potential means to obtain liquidity on the markets “have already been explored and exhausted”, according to an emailed statement.

The loan would give it “vital liquidity to face this difficult period, before an expected recovery in sales once the restrictions are lifted progressively”.

Regulators worked with France to ensure public support could “be put in place as quickly and effectively as possible”, EU Competition Commissioner Margrethe Vestager said in the statement.

The guarantee required EU approval because it covers 90 per cent of the loan, more than the 70 per cent limit that France can give without an EU review under aid rules adopted in March as the pandemic took hold.

The guarantee can last up to six years, and the loan it backs cannot exceed €4 billion euro. The guarantee premium must increase over time to encourage early reimbursement, the EU said.

The Netherlands has said it plans to provide between €2 billion and €4 billion to KLM, the company’s Dutch operation, through a loan and guarantees. Precise details are still being worked out, finance minister Wopke Hoekstra said last month.

The EU separately plans to ease rules for governments to grant more subordinated debt, which potentially puts taxpayers on the hook to take losses ahead of other creditors if the companies receiving aid become insolvent. – Bloomberg