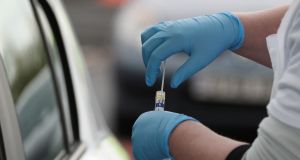 The Mental Health Commission is concerned about ‘significant inconsistencies’ in the application of guidance relating to the testing of mental health staff. Photograph: Andrew Milligan/PA

The Mental Health Commission is concerned about “significant inconsistencies” in the application of guidance relating to the testing of mental health staff for coronavirus.

They found that “significant inconsistencies” still remain in the application of new guidance for testing in residential care facilities.

The commission found that while a number of services were now reporting that staff testing was planned, others reported that they were still waiting to hear about testing. In addition, areas that had completed testing reported delays in receiving results.

John Farrelly, chief executive of the commission, said their “primary focus” is on the safety and wellbeing of patients and residents of mental health facilities and they have “significant concerns” around staff testing.

“We are concerned at the lack of consistency, standardisation and oversight of this process. It is important that this is not seen as a once-off process and that the process for service wide staff testing is embedded and repeated regularly,” Mr Farrelly said.

“Staff have been and always will be a key line of defence in the protection of mental health residents and patients. If we want to keep them safe, then we must keep staff safe. We will continue to follow up on this matter with the HSE as a matter of priority.”

Mr Farrelly’s comments come following concerns by health officials that there will be “considerably more” coronavirus cases in mental health and disability centres.

As of Friday, May 1st, there were 13 deaths of residents of mental health services, up one since the previous week.

Anne O’Connor, chief operations officer at the HSE, said the executive had redeployed staff to long-term residential facilities to assist centres where staff were out due to outbreaks.

Concerns were raised that previous documents provided a situation in which people with disabilities may face difficulty in accessing life-saving treatment based on “frailty scales”.

Enda Egan, chief executive of the charity, said these new guidelines state that people with disabilities “should not be discriminated against when it comes to accessing healthcare, up to and including intensive are”.