Covid-19 turns WHO into battleground for superpower rivalry 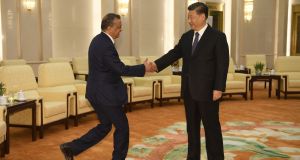 The Covid-19 pandemic is turning the World Health Organisation (WHO) into a battleground for superpower rivalry between Beijing and Washington. Though European Union leaders agree with some of US president Donald Trump’s criticisms of the United Nations organisation, most would rather improve the WHO than punish it, as Trump did when he announced the suspension of US funding on April 14th.

Dr Tedros Adhanom Ghebreyesus, the Ethiopian microbiologist who was appointed to head the WHO in 2017, with Chinese support, is viewed by some critics as being too close to Beijing.

Much has been made of a photograph of Tedros meeting President Xi Jinping in Beijing on January 28th. The WHO director-general bends his knees slightly as he shakes Xi’s hand.

Tedros’s critics consider his praise of China excessive. On returning from Beijing to Geneva on January 30th, Tedros told a video press conference: “The Chinese government is to be congratulated for the extraordinary measures it has taken to contain the outbreak . . . The speed with which China detected the outbreak, isolated the virus, sequenced the genome and shared it with the WHO and the world are very impressive, and beyond words. So is China’s commitment to transparency . . . In many ways, China is actually setting a new standard for outbreak response, and it’s not an exaggeration.”

Tedros did not mention that whistleblowers were punished by Beijing for calling attention to the epidemic, or that the authorities organised a giant banquet for 40,000 families in Wuhan on January 18th.

Chris Patten, the last British governor of Hong Kong, offered a diametrically opposed assessment of China’s handling of the pandemic in an interview with Le Point magazine: “Like the Sars epidemic in 2012, Covid-19 was hushed up by the Communist Party,” Patten said. “By denying for so long the scale of the pandemic in Wuhan and its transmission by humans, Beijing allowed millions of its citizens to travel for the Chinese New Year, within the country and abroad. This policy is responsible for spreading this lethal pandemic.”

The WHO is also accused of responding slowly to the crisis, often by western leaders who were themselves unprepared.

The WHO first learned of a cluster of atypical pneumonia cases in Wuhan on December 31st. Although it alluded to the possibility earlier, it did not publicise evidence of human-to-human transmission until January 22nd, two days after Beijing acknowledged the disease was contagious.

When the WHO’s emergency committee finally convened on January 22nd, the ambassadors of China and three other Asian countries affected by the virus were invited to the meeting. Le Monde quotes a diplomatic source saying the Chinese ambassador told the meeting that declaring a public health emergency of international concern – or PHEIC – was “out of the question”.

The meeting adjourned and did not reconvene until January 30th, when it declared a PHEIC.

The WHO has also been criticised for not “declaring” a pandemic until March 11th. The organisation has been at pains to explain that it can “declare” a PHEIC by regulation, but can only “characterise” a pandemic.

At his March 11th press conference, Tedros stated there had been 4,292 Covid-19 deaths and 118,000 infections. “We have therefore made the assessment that Covid-19 can be characterised as a pandemic,” he said. By May 4th, global coronavirus cases had surpassed 3.5 million and deaths neared a quarter of a million.

The WHO has been subjected to a barrage of threats and fake news which Tedros calls an “infodemic”. Bill Gates, the Microsoft founder who is now the WHO’s single largest donor, is another victim. Conspiracy theories accusing Gates of playing a role in the creation of the pandemic were viewed five million times on YouTube videos, and posted 16,000 times on Facebook, between February and April, according to an investigation by the New York Times.

Trump claimed on April 16th that a videoconference of G7 leaders had agreed to reform the WHO. French foreign minister Jean-Yves Le Drian has said there “are doubtless things to be said about the functioning of the WHO. Perhaps it didn’t react quickly enough. Perhaps it lacks autonomy in relation to states. Perhaps it lacks the means to detect, alert, inform and make rules.”

Academics and scientists have written multiple opinion pieces in French newspapers regarding the future of the WHO. Most argue that the organisation needs support, not condemnation, in the midst of a pandemic. That is also the opinion of Angela Merkel, Bill and Melinda Gates and apparently the Irish Government, which quadrupled its contribution after the US defection.

Australian prime minister Scott Morrison has discussed his three-point plan for the reform of the WHO with the leaders of the US, France, Germany and New Zealand.

Morrison wants to do away with member states’ right of veto, set up an independent review organisation to assess WHO performance in global health disasters, and give the organisation the right to dispatch investigators, comparable to weapons inspectors, to determine the cause of epidemics.

At his March 11th press conference, Tedros was asked to name countries he accused of “alarming inactivity” in the face of the pandemic. “The WHO doesn’t interact in public debate or criticise our member states in public,” Dr Mike Ryan, the Irish executive director of the WHO health emergencies programme, responded.

The limits of the WHO are in fact those of the UN system. Guillaume Devin, a specialist in multilateralism at the political science institute Sciences Po, says the withdrawal of the US, the blocking power of Russia, and China’s strategy of conquest have paralysed the UN Security Council. “These three states hold the key to international co-operation, and they agree on almost nothing,” Devin told Le Monde.

Until now, China contributed less than 10 per cent the amount the US did to the WHO budget. If western countries have lost influence, it is partly their own fault, Chris Patten implied. In view of their substantial donations, “One may ask why the US, Europe and Japan did not play a more active role in recent years, to counter [Chinese influence