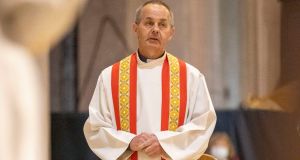 Bishop-elect Martin Hayes on his appointment as Bishop of Kilmore at the Cathedral of Saint Patrick and Saint Felim, Cavan. Photograph: Liam McBurney/PA Wire

In 1981 Fr Martin Hayes (60) graduated from what is now the University of Limerick with a BSc in Manufacturing Technology. After a period setting up quality control systems for new products at Silicon Valley, he began work as a quality engineer with Amdahl Computers in Swords, Co Dublin.

On Monday it was announced that he is to be the new Bishop of Kilmore, taking in Co Cavan as well as parts of Leitrim, Fermanagh, Meath and Sligo. He succeeds Bishop Leo O’Reilly who retired on health grounds in December 2018.

Fr Hayes was 24 when he entered the seminary at St Patrick’s College, Thurles, Co Tipperary. Born near Two-Mile-Borris, Thurles, on October 24th 1959, he is the eldest of eight children, five boys three girls, born to the late Daniel and Mary Agnes Hayes.

His ordination by then Archbishop of Thurles Dermot Clifford was in June 1989 after which he did further study in Rome before returning to St Patrick’s College Thurles where he taught philosophy until 2001.

During those years he was involved with setting up SUAS (Suicide: Understanding and Support), a listening service for those bereaved by suicide. He also spent summers working in California’s diocese of Sacramento.

In July 2007 Fr Hayes was appointed Administrator of the Cathedral of the Assumption Thurles and in 2017 he became director of pastoral planning and development in the archdiocese. Following widespread consultation involving priests and laity, a draft pastoral plan was formulated in spring this year.

It is hoped to implement a diocesan pastoral plan for parishes in the archdiocese between now and 2025.