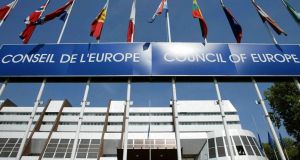 The Council of Europe’s European Committee of Social Rights says Ireland is one of 14 EU states violating the European Social Charter, on women’s rights to equality at work. Photograph: Christian Hartmann/EPA

Irish women’s right to equal pay for equal work, and to equality in career development, are not guaranteed, the Council of Europe has found.

In a hard-hitting judgment against Ireland, published on Monday, the council’s European Committee of Social Rights says Ireland is one of 14 member states violating the legally-binding European Social Charter, on women’s rights to equality at work.

It criticises Ireland’s lack of data on what men and women in comparable jobs are being paid, saying this prevents women proving discrimination and means Ireland cannot show progress.

Complaints were made to the committee about 15 countries by the international NGO University Women of Europe (UWE). Only Sweden was found to be fully compliant.

Under article four of the charter, countries undertake to “to recognise the right of men and women workers to equal pay for work of equal value”.

Under article 20 they undertake “to take appropriate measures to ensure” gender equality in “access to employment, protection against dismissal and occupational reintegration; vocational guidance, training, retraining and rehabilitation; terms of employment and working conditions, including remuneration and career development, including promotion”.

The UWE argued that although Ireland had legislation providing for equal pay and opportunity, these were not guaranteed on the ground.

“UWE claims that women who may wish to make complaints find it hard or impossible to obtain comparative data concerning wages paid,” the preamble to the judgment says.

Agreeing, the committee says it “considers that the lack of pay transparency is a major obstacle for victims of pay discrimination to prove discrimination and thus effectively enforce their rights.

“Pay transparency is an enabling tool for workers or social partners to take appropriate action, such as to challenge pay discrimination before national courts. Therefore, the committee considers that in view of the fact that the pay transparency is not yet guaranteed in practice, pending the implementation of an appropriate legal framework, the situation is not compatible with the charter.”

Ireland has not provided statistics on the hourly gender pay gap since 2014, when it was shown the gap had increased to 13.9 per cent since 2006, when it was 12.6 per cent.

“The committee considers that the collection of reliable and standardised data is indispensable to the formulation of rational policy that would aim at reducing the gender pay gap.

“In the absence of such information . . . it has not been demonstrated that the obligation to achieve measurable progress in reducing the gender pay gap has been fulfilled . . . Therefore . . . there is a violation of article 20.c of the charter,” the committee says.

The lack of women in senior managerial roles in private companies means Ireland has failed to vindicate the equal right of women to career development including promotion.

And while the government has taken measures to meet its obligation to “tackle vertical segregation of women in the labour market . . . these measures have not led to a balanced representation of women in decision-making positions in private companies nor to a clear trend for improvement.

“The committee holds that there is a violation of article 20.d of the charter.”