Direct provision: How the controversial system may be demolished 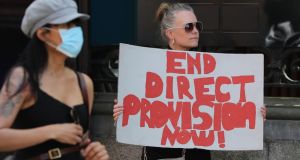 Protesters outside Leinster House in May call for the end of direct provision. This year, direct provision will cost the State about €200 million. Photograph: Nick Bradshaw

On a clear cold day in early May, onlookers peering through the gates of Leinster House could make out the figures of a handful of prominent Fianna Fáil and Fine Gael TDs including Micheál Martin and Charlie Flanagan.

It was the first full day of government formation talks. Standing well apart, the Fianna Fáil and Fine Gael politicians could be seen laughing together before they made their way for the opening round of talks with the Greens.

That day saw the first of the Green Party’s red lines. Its negotiators, including Dublin West TD Roderic O’Gorman, told the two bigger parties that they would not budge on their demand to end direct provision. No “ambiguity” would be accepted.

The topic was put to one side, while solutions were sought. Eventually, a deal was struck with input from party deputy leaders Catherine Martin, Dara Calleary and Simon Coveney. “You don’t get these things across the line without people laying their bodies on the tracks for it,” said one source.

In the end, the Greens scored a victory with the programme for government committing to ending direct provision and replacing it with a “new international protection accommodation policy, centred on a not-for-profit approach”.

A White Paper will come by the end of year, along with “annualised capital and current investment” to fund changes. While groups such as the Irish Refugee Council strongly endorsed the pledges, they also warned that there have been “false dawns” before.

Doubts exist that a 20-year-old system can be rapidly dismantled: “That’s not going to be easy and we shouldn’t fool ourselves, it is a big job, there are 7,700 people who need to be provided with alternative accommodation,” O’Gorman told party members later.

The agreement will lay out the accommodation model before the end of the year, “but it will be centred on the not-for-profit model, so no more of this private operators creaming off profits,” he said.

How exactly it will be done has not yet been worked out. Already, the parties are pulling in different directions. Fine Gael and Fianna Fáil emphasise reducing the length of time an asylum seeker stays in the system. The Greens want the model changed, not “improved upon”.

Accommodation, they say, should be provided by new, or existing approved housing bodies, not private operators; while asylum seekers could qualify for a HAP-like allowances, alongside local authority support to find a home.

Mindful of the housing crisis, with nearly 70,000 people on the waiting list, Fine Gael and Fianna Fáil say, nevertheless, that they are open to own-door and self-catering accommodation. A solution, if it can be found, will be a mixture of what everyone wants.

Confident that major reform will come, Minister for Justice Charlie Flanagan cautions against simple slogans. “We must have a rules-based system,” he says, “Amnesties and free-for-alls are easier said than done.

“We need to observe EU laws and international conventions. To me the key reform will be the length of time applicants wait. I’d like all applications dealt with within six to nine months of arrival and decisions made,” he told The Irish Times.

“There are many applicants for international protection from so-called ‘safe countries of origin’, some are even EU candidate countries. It’s somewhat odd that so many persons are ‘fleeing persecution and oppression’ from these countries. This too needs to be dealt with.”

The cost of ending direct provision is unknown. The last report on the matter dates back to 2010, which warned that own-door asylum accommodation would cost twice as much. This year, direct provision will cost the State about €200 million.

Shifting the system from private providers to one run by not-for-profit operators will not be easy either, as evidenced by last year’s Oireachtas Committee on Justice report. Just three of the existing 39 centres were purpose-built by the State. The rest are private.

That same report expressed concern regarding the “lack of transparency and public oversight” of the private companies, with many Oireachtas members doubting that they should be involved in “delivering vital services to particularly vulnerable people”.

However, committee members said they were “cognisant that the general shortage of accommodation in Ireland could greatly limit the feasibility of alternative options to the current direct provision accommodation type”.

Taoiseach Leo Varadkar has said State-provided options “may well be the right model”, but public objections occur “the minute a planning application goes in”. The State’s attitude will need to change, but so, too, will the public’s.

The next step comes in September when former European Commission secretary-general Catherine Day delivers her report on reform of direct provision, which will heavily influence the White Paper due later in the year.

So how are asylum seekers and refugees accommodated around Europe? Are there lessons for Ireland? An examination of the asylum system existing across the European Union offers few easy answers.

Under EU law stemming from the 1990s, arrivals who claim asylum are the responsibility of the first country they set foot in – leaving border states such as Italy and Greece bearing a disproportionate weight. Efforts to share the burden have stalled for years.

Last year, the largest number of asylum seekers came from Syria, followed by Afghanistan, Venezuela, Colombia and Iraq. Just under a third are children. More than three-quarters are under 35. Nearly two-thirds are male. Men and boys travel first, hoping to bring their families later.

The number applying roughly doubled in 2015 and 2016, spurred by the Syrian war. However, it dropped to 676,300 in 2019. Germany was the most popular, receiving 142,400 applications last year. France and Spain each got roughly 20 per cent of all applications.

The percentage of successful asylum seekers varies widely: 66.2 per cent are approved first time in Spain. Just 8.5 per cent did so in Hungary. Ireland is close to the EU average, approving roughly half of first-time applications.

The rules governing asylum accommodation vary widely in the EU. Sometimes, local governments are in charge, not the national one. Most states offer a mix of housing: emergency provision, collective centres, or flats and houses.

In Greece, tens of thousands of people live in refugee camps, sleeping in tents or, sometimes, in the open, often lacking running water. Smaller such camps exist elsewhere, while homelessness is a major problem for asylum seekers in many European cities.

Ireland’s direct-provision system is increasingly common across the EU. In principle, they are not necessarily regarded as a bad thing by refugee rights advocates. Everything depends on the execution, though experts say people should stay in them for no longer than six months.

Ireland’s system is closest to that of the Netherlands, where asylum seekers are housed in centres, sometimes in rural locations. However, the Dutch residents have more independence, and their own kitchens. In Ireland, some have self-catering kitchens, but others do not. All of them are required to be self-catering by next year.

People stay too long in Irish centres, some for up to a decade. In 2017, the Belgian court of auditors found refugees there spent an average of 13 months in reception centres, which it found to be “far too long”.

In earlier years a high percentage of Irish applications were ultimately rejected, with policy partially motivated by a Department of Justice decision to make the system unappealing to dissuade future applications.

In Sweden, asylum seekers can live in a collective centre or in a rented flat. Housing is dispersed around the country, but some municipalities refuse to take part.

“The Swedish mostly opt for apartments,” said Petra Baeyens, the senior legal counsel at the European Council on Refugees and Exiles. “They strongly believe it increases self-reliance and integration.”

In Spain, asylum seekers get help to find housing after six months in a collective centre. Due to shortages and other barriers, some end up homeless. Other states have set time limits to force people out of reception accommodation.

Collective centres are thought to be cheaper than individual housing, but a Belgian study found the opposite. Apartments or houses were up to €20 per head per day cheaper.

Individual housing is not necessarily problem-free, either. In Britain, asylum- seekers are housed in privately-owned houses and apartments, but there are strong criticism about conditions and the separation of families.

“What happens in the UK is that has been taken on by large-scale landlords. They’ve very much profit-driven,” said Nick Henderson, chief executive of the Irish Refugee Council.

*This article was amended on June 29th 2020 to correct an error, the number of applications for asylum was 4,780 and not 1,090 as previously stated