Creches reopen: ‘Some of them were cuddling into their mam’s legs’ 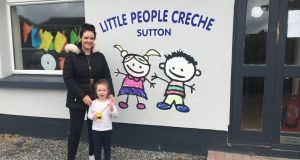 Anne-Marie Lally and daughter Lucy (4) on their return to the Little People Creche in Dublin on Monday. Photograph: Mark Hilliard

The vast majority of creches reopened their doors on Monday morning in line with Covid-19 predictions but capacity at facilities is thought to be at about half.

As parents returned their children to limited services closed since March, the industry warned that more needs to be done to protect its future viability.

Representative bodies Early Childhood Ireland (ECI) and Seas Suas estimated about 85 per cent of operators who normally open at this time of the year had done so.

One of those, the Little People Creche in Sutton, Dublin, had spent some time preparing before welcoming children back on Monday morning.

“Overall they were fine. Some of them were cuddling into their mam’s legs. One mother was quite upset because their child had only [just] settled in before Covid,” said manager Ciara Crowley.

“The only challenging part was the initial coming in but once they settled down to breakfast they were fine.”

Little People has a capacity of 40 children but welcomed back just 24 - as for many operators, this is a quieter time of the year anyway.

Social distancing has been encouraged among parents outside. Inside, the creche’s small rooms are ideal for the new “pod” system of small groups of children and staff have been supplied with sanitising and safety packs for each room.

On arrival the children wash their hands, have their temperatures checked and change their outdoor shoes for their new, permanent indoor ones.

“It’s great to get them back in creche work-wise; I don’t have to hide in the toilet to take work calls,” said mother Sinead Fitzpatrick, a solicitor whose experience echoes that of many parents left simultaneously working and caring for their children in recent months.

“I suppose if there was any kind of flare up again at least it’s in a controlled area and I think they are doing everything they should be. There is only so much you can do with children this age.”

Anne-Marie Lally, collecting her children Lucy (4) and Anna (2), said it was now an opportune time for the Government to do something about the costs of childcare for working families.

She said there was still some anxiety among her friends in general terms about returning their children to care facilities.

“It’s a big relief but you are nervous about how it’s going to work in practice,” she said of the new measures.

Early Childhood Ireland said the majority of the 1,800 creches which normally operate over the summer months had reopened but with most expecting 50 per cent capacity. A further 2,800 centres are expected to reopen in September “if it is financially viable for them to do so”, it said.

It said it vital the Department of Children monitors the reopening phase to ensure children and staff are safe but that Monday’s tentative moves toward normality were positive. “We have only heard good things,” said Frances Byrne, director of policy.

Marian Quinn of the Association of Childhood Professionals said the reopening efforts had been successful but that many providers had maintained contact with children virtually in the build-up. “The educators were never out of the minds of the children,” she said.

Research conducted on behalf of Seas Suas found that 85 per cent of service providers (based on a sample of 44) said the costs of reopening has been the biggest challenge, with almost half incurring costs of €10,000 or more.

Just over one-in-four will be unable to bring all staff back immediately due to reduced demand, it said, with about €130 million needed over the next six months to “address uncertainty” and support the sector.