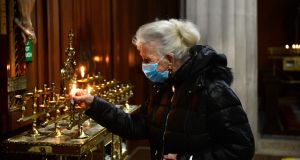 About 40 people attended the first public Mass in Dublin’s St Mary’s Pro Cathedral in more than three months on Monday.

“Welcome back to our first celebration of Mass since the middle of March,” said celebrant and parish administrator Fr Kieran McDermott.

Signs outside advised people that “our experience of Mass will be different for many months to come. Due to Covid-19 restrictions the maximum number of people permitted to enter the cathedral will be 50 maintaining social distance (2 metres),” they read. Signs inside warned against lighting candles after using the sanitisers, as the liquid is flammable.

During the Mass Fr McDermott advised people to nod towards one another at the sign of peace while at Communion he and a Minister for the Eucharist, both masked, went into the body of the cathedral and distributed hosts into the hands of people who wished to receive.

On returning to the altar both santised their hands and removed the masks.

Later, Joan Ryan from Donabate said it was “wonderful” to be be able to attend again, particularly as she works in the city. “I suppose for me the Pro Cathedral is my start to the day. It’s wonderful. It’s getting us back to some sort of normality, stepping in that direction,” she said. It was also her “first time in town” since March. “This is the start, so it’s brilliant,” she said.

John Morgan from Celbridge, Co Kildare, felt similarly. He “happened to be in Dublin” as his wife “had an appointment to get her hair cut”. He just “passed by the Pro Cathedral and I saw that it was open and I was glad to be able to get Mass. I’m delighted,” he said.

“We’ve been able to go to Mass online the past number of Sundays but it’s great to be able to go in and be physically present. You definitely appreciate it all the more, being away from it for a number of weeks.”

After the Mass, Fr McDermott said “the first person through the door this morning was one of our parishioners who lives about 900 metres from here. It was wonderful to see her.”

At the cathedral they “just didn’t know what was going to happen” when they opened the doors. “Would it be 10 people, would it be 100 people? We reckon 40 people came here. Most of them I recognise as parishioners or regulars,” he said. He was “pleasantly surprised”.

Worship for many people “is a habit” and if you break a habit “you just don’t know what’s going to happen. So it’s great to see so many people here today,” he said.

As celebrant he also welcomed the return to public worship. “To have somebody respond to the prayers, and many of the prayers in the liturgy are prayers of the people making their responses, you miss that.” Similarly when preaching. “To do so in an empty space [on webcam], while I got used to it, it was very strange. Now I can look into people’s eyes. I can see how the message is being received and so on, it’s a connection.”

Cathedral sacristan Robbie Byrne said the building was cleaned every day and “fogged”. It involved a machine creating a fog which “comes down from a height and takes the droplets out of the air, or any disease in the air”.

The cathedral was cleaned daily using “HSE and the Archbishop’s guidelines”, he said. Byrne, a retired member of the Defence Forces, served in refugee camps in Africa and Lebanon where there was always great emphasis on keeping out disease, including Ebola, he said.