Increase in drug and alcohol abuse predicted after lockdown – charities 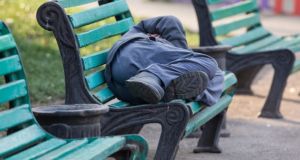 Increased drug-mixing and alcohol abuse, as well as risky drug-taking are predicted among vulnerable drug-users, as the country emerges from lockdown, warn organisation working with them.

In a joint report published on Wednesday, Merchants Quay Ireland (MQI), Coolmine Lodge and Depaul, call on any new government to move quickly to ensure this cohort are provided with housing, treatment and healthcare supports they need.

“For people who use drugs, reconfigured services and reduced residential detox and treatment beds are having a significant impact on people’s drug use and mental health. We are predicting an increase in polysubstance use with a prevalence of alcohol and non-prescribed medication,” they say.

On the other hand, some changes have improved lives and outcomes for vulnerable homeless people and these must be retained.

“There was a move away from provision of communal temporary accommodation to more self-contained settings such as hotels and tourist apartments. This was a vital step in combatting the spread of the virus amongst such groups.”

A majority of homeless drug-users had access to healthcare since the pandemic – a significant change. And waiting times to access methadone treatment have decreased from about 12 weeks to just five days.

These improvements cannot be allowed slip away say the agencies, particularly with the risk of a second wave of the virus.

Among those whom agencies worked with during the pandemic was David, in his early 20s, who was found trying to gather money from passers-by outside a closed shopping centre. He thought all homeless services were closed and was in serious need of medical attention, as drug-taking related wounds were “seeping, painful and itchy”.

“The MQI team gave him some food and water, explained… he could get a hot meal at our service... and encouraged him to go get his legs dressed while he was there.” It was ascertained he had a hostel bed booked for the night.

“Once in the building MQI staff could, if appropriate, leverage this interaction with David to highlight harm reduction options.”

The case underlines, says the report, the crucial role food, healthcare and accommodation services play as the gateway to longer-term supports.

Mary (49) was sharing a hostel with 35 other women and was transferred to a single-room in a hotel as she is immune compromised. She worries about leaving it, but now has a key-worker working on sourcing long-term accommodation and healthcare.

The State should retain access to hotels and short-stay apartments for homeless people, say the organisations.

Increased drug-treatment capacity should be maintained, and, structured health plans must be provided to those exiting cocooning facilities.

The work these organisations do is in most case, not provided by any state agency, they say. They are funded by Government to reach some of the most hard-to-reach populations and their work must be made sustainable. Crucial to this will be sustainable funding and fair pay for those working in the sector. These issues “have to be addressed” as a “priority” by government.