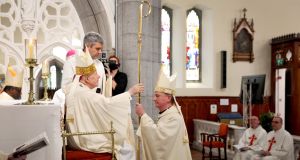 The former parish priest of Newbridge Co Kildare, Fr Paul Dempsey (49), was ordained as the new Bishop of Achonry in the West of Ireland on Sunday.

It was the first ordination of a diocesan bishop on the island of Ireland since the arrival of Covid-19 last Spring. It took place on Sunday afternoon at the Cathedral of the Annunciation and St Nathy, Ballaghaderreen, Co Roscommon.

Bishop Dempsey’s appointment was announced last January and his episcopal ordination in Ballaghaderreen was to take place on April 19th last but was postponed due to the pandemic.

Bishop Dempsey was born in Carlow town on April 20th, 1971, but the family moved to Athy, Co Kildare in 1978 . The youngest in his family, he has one brother, Tony, and two sisters Bernadette and Angela. Both their parents died in 1994. Their mother Berry died from cancer in February and father Tony died suddenly 12 days later.

In his sermon Fr Vincent Sherlock, parish priest of Kilmovee, Co Mayo, noted how the new Bishop would be “among the youngest of our priests” in Achonry. He recalled the Kavanagh poem ‘To The Man After The Harrow’, about a neighbour of the poet’s who was being ordained a priest.

“Now leave the check-reins slack, The seed is flying far today,” Fr Sherlockquoted. It concerned “a young man who could run the risk of being rigid, fearful, anxious – wanting to make no mistake,” he said. “The slackness of the check reins,” encouraged “the horse to give of its best, to walk a straight path and allow far flung seeds to embed themselves in the stony grey soilm” Fr Sherlock said.

“Paul, I hear Kavanagh say the same to you. Be yourself Paul, be relaxed and encourage others through gentle witness. No need for a tight grip, since you are walking in the Gospel message, with your people, walking for your people, the journey and the work will continue” he said.

Recalling the Kavanagh poem ‘Father Mat’, Fr Sherlock noted its description of the old priest as”part of the place, natural as a round stone in a grass field.”

Achonry diocese had “its share of grass fields with stones in their corners and our diocese needs priests and a bishop to be a natural part of the place. Working with you Paul, as priests, religious and laity, may His (God’s) gentle spirit be known through ours,” he said.

At the end of the ceremony Bishop Dempsey said that on his first visit to Ballaghaderreen he was shown where deceased Bishops of Achonry were buried. “It was “a sobering thought in case I got ahead of myself!” he said.

“In a similar vein, while reading the history of the diocese, I came across a bishop who came to Achonry, transferred from Killala diocese, in the late 18th Century. It was observed that he was ‘very elderly, toothless and goutish…’ I still have my full set of teeth and to the best of my knowledge, I don’t suffer from gout, so I hope things are looking up!”, he said.

In recent months, he recalled, “we’ve become familiar with the saying; ‘We’re in this together.’ As a diocese we’re on this faith journey together.”

There would be “challenges along the way”, he said. Drawing “hope and encouragement” from the words of poet Brendan Kennelly, he quoted: “Even though we live in a world that dreams of ending/That’s always seems about to give in/Something that will not acknowledge conclusion/Insists that we forever begin’.”

Bishop Dempsey concluded: “So, from this sacred place, where the Christian story has been celebrated for generations. Let us go out, go out to where Christ is calling us as community of disciples today. Let us begin!”