Clare Heffernan has been told she will have to soon leave St Mary's nursing home in Dublin but with no other facility for the visually impaired in Dublin she's fearful of where she may end up. Video: Enda O'Dowd 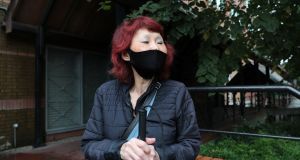 Clare Heffernan, a resident of the apartments attached to St Mary’s (Telford) nursing home in Ballsbridge, Dublin 4. ‘I can’t sleep. I cannot eat. I am so traumatised.’ Photograph: Nick Bradshaw

Residents of a south Dublin nursing home and supported living facility say they are terrified, devastated and “very angry” at its threatened closure.

Provisional liquidators Baker Tilly have been appointed to St Mary’s (Telford), which includes a nursing home and apartments for women who are blind, on Merrion Road. Liquidation, however, is being challenged in the High Court by families of several residents and is adjourned until September 7th.

St Mary’s was founded by the Sisters of Charity in 1868 as a school and “asylum” for blind women and girls. The sisters have not been involved in its management since 1996, though they own the land and campus and two sisters sit on the board of management.

Clare Heffernan (66), who is almost totally blind, has lived in an apartment on campus since 2015. Originally from Malaysia, she came to Ireland in 1975 to work as a translator. She got an apartment in St Mary’s through a referral from the National Council for the Blind of Ireland (NCBI).

“When I came here I thought my dreams had all come true. I was told I could stay here. I am in a one-bedroom apartment. It is very, very lovely.”

The women in the apartments live independently but can call on staff in the nursing home who specialise in care of the visually impaired.

Heffernan, like other women who spoke to The Irish Times, was told in early June about the nursing home’s closure.

“I asked if the apartments would be kept open. They promised me they would not be closing. Then on July 24th the manager came and told me a liquidator was being appointed, that everything was being closed. I was very devastated, I was very shocked and traumatised. It was very distressing.”

Another apartment resident, aged 60, did not want to give her name. She had been a pupil in the school in the 1960s. She was told “verbally” on July 24th that the apartments were being closed, having previously been assured the residents were “safe”.

A residents’ meeting, hosted by management on July 30th, provided no reassurance, say the women.

“They wouldn’t give an eviction timeframe so we are just at the mercy of all these people,” says Heffernan. “I feel angry, I feel sold down the drain. They don’t care about our feelings. All the uncertainty and instability is doing my head in.

“I can’t sleep. I cannot eat. I am so traumatised. I am very, very stressed. I feel I can’t cope. The anxiety, the fear is very crippling.”

Another resident, aged 68 and a former care assistant in the home, says she feels “totally let down”. She has glaucoma, has lived here for five years, and says St Mary’s has been “a lovely place to work and live”.

“All I have been told is we have to wait for the HSE to decide where we will go. I am very angry and very hurt. I am not ready for a nursing home.”

The women are appealing to the HSE to take over the management of St Mary’s. “This is a very valuable and very precious facility which we need to hang on to,” saysHeffernan. “There is no nursing home or service anywhere else that that has a disability service for the blind.”

The board at St Mary’s (Telford) referred queries from The Irish Times to Baker Tilly.

Baker Tilly said it could not comment as the liquidation has not been confirmed.

A spokeswoman for the HSE said: “We are continuing to liaise with the regulator and the provisional liquidator of St Mary’s (Telford) Ltd. As required and directed we will support the persons in charge to ensure the interests and welfare of the remaining residents is maintained.”

A spokeswoman for the Sisters of Charity said they were “concerned about the closure of the independent company governing St Mary’s (Telford)”.

“We are very saddened by what we are hearing and hope that a resolution is found quickly to ease the discomfort and distress of the situation. The order is aware that the liquidator and the HSE are in discussions and is waiting to hear from them.”

The sisters are also in discussion with the Charities Regulator with a view to making ex-gratia payments to staff “in recognition of their dedicated service to the residents of the home”. This follows a statement from the board earlier this month that they would not be in a position to pay statutory redundancy.