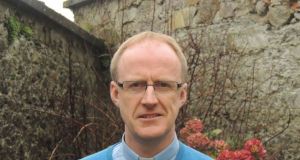 Fr Ned Hassett of the Abbeyside Parish in Co Waterford says ‘people are supporting each other, they are going that extra mile’.

Fr Ned Hassett has been the parish priest of Abbeyside, Ballinroad and Garranbane in Co Waterford for more than six years but never before has he experienced an Easter like this one.

He still connects with the locals from his area through webstreamed Masses, or socially-distant conversations but “it’s a challenge”, he says.

“On a personal level, it was almost less pressure not having to prepare homilies but after a few days you really miss connecting to people. Not being able to connect is the biggest thing,” Fr Hassett says.

“I’m not a social media person, it was a new thing for me. But I learned that it was important for connecting with people.”

He says that, despite the uncertain times, the spirit of Easter is still being shown by communities.

“We’re seeing it through people’s goodness. People are supporting each other, they are going that extra mile, and they have more time to reflect. Goodness is just being expressed in people’s lives.”

While out on his daily walk around his local area, Fr Hassett says he has encountered members of his parish, whom he describes as aware and accepting.

On one occasion, he met a 92-year-old woman last week who, he says, “knows she is dying”.

“You have to be prepared, Father. I’m prepared,” she said to him, and in the next breath she added: “Isn’t it terrible all those poor people dying… 23 today. I pray for them.”

Judge orders release of woman who poses ‘imminent’ risk to mother 12:19
Flu vaccine delay should be resolved by end of October - IMO 12:18
Covid-19: Restaurant industry left ‘in a vacuum of the unknown’- RAI 12:06
Further restrictions expected for Dublin if Covid-19 infection rate does not stablilise 12:01
Rise in Covid-19 hospitalisations ‘a very concerning trend’, says Paul Reid 11:37