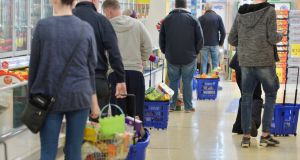 Customers in Tesco in Rush stand on two-metre markers when queuing for the checkouts. The British supermarket chain this week said it would take a €1 billion hit from the costs of dealing with the pandemic. Photograph: Alan Betson/The Irish Times

The human and economic toll of the coronavirus pandemic all over the world would scarcely have been believed just a few short months ago, but with each passing week the damage just seems to grow and grow.

This week, IMF managing director Kristalina Georgieva warned that the pandemic sweeping the world will turn global economic growth “sharply negative” in 2020, triggering the worst fallout since the Great Depression of the 1930s.

The best we can expect is a partial recovery in 2021, with governments having undertaken fiscal stimulus measures of $8 trillion (€7.3 trillion). More will be needed, she said, with the crisis to hit emerging markets and developing countries the hardest.

Separately, former IMF executive Ajai Chopra said the crisis has hit the world economy “much harder and much faster than anything before”, and will have a deeper impact than the 2008 financial crash.

Elsewhere, an Oxfam report warned the economic fallout from the Covid-19 pandemic could push half a billion more people into poverty unless action is taken to bail out developing countries.

At home, all arms of the State have been mustered to deal with the fallout and limit the damage.

The National Treasury Management Agency (NTMA) this week raised €6 billion in its largest bond sale in more than a decade. Before the transaction, market sources had signalled the agency was planning to raise between €3 billion and €4 billion.

The funds will help finance the State’s response to the coronavirus crisis, which is expected to result in a budget deficit of nearly €20 billion this year.

The debt-management agency said the sale of new seven-year bonds attracted €33 billion worth of bids, meaning it was 5.5 times oversubscribed, with “strong demand” from a broad and diversified investor base.

Meanwhile, the Central Bank released almost €1 billion in liquidity to the banking sector, which could facilitate lending of up to €16 billion, according to a note published by the regulator.

Last month, the Central Bank reduced the countercyclical capital buffer from 1 per cent to zero. The buffer effectively acts as a rainy day fund, requiring banks to hold capital in good times and release it in bad times.

Companies and employees struggling for air

What with the economy, movement of people and virtually all infrastructure projects grinding to a halt, the consequences of the Covid-19 pandemic for businesses and their employees have been staggering.

One in five companies have laid off all their staff, according to a major new survey, while half of Irish SMEs expect revenue to decline by at least 60 per cent over the next three months.

The survey by Chambers Ireland also showed more than six out of 10 companies have already sought a deferral on payments, generally to landlords, banks or the Revenue Commissioners.

Elsewhere, construction collapsed at record speed last month, hitting its lowest level since a recession devastated the industry 11 years ago.

Work on big projects – including the National Children’s Hospital, Grangegorman Technological University Campus, new roads and housebuilding – stalled across the Republic, hitting up to 30,000 jobs.

The Ulster Bank’s construction PMI index fell to 28.9 in March from 50.6 in February, indicating that the industry virtually collapsed, with the 50 mark separating growth from contraction.

Separately, the Society of Chartered Surveyors Ireland warned major building projects could take up to two years to get up and running after the crisis unless the Government learns lessons from the last financial crash.

Meanwhile, a total of €34 billion has been wiped off the value of Iseq 20 companies over the past three months. AIB and Bank of Ireland were the biggest losers, shedding 69 per cent and 65 per cent of their market values, respectively.

Not a single stock has gained in value over the period; the smallest loser by market cap was Greencoat Renewables, which has shed just 6.6 per cent of its value.

One of the hardest-hit sectors has been aviation, and concerns were raised this week of its prospects of recovery from the pandemic that has grounded virtually all passenger flights.

Paco Debonnaire, analyst and vice president of credit ratings agency Moodys, said the pace of air traffic’s recovery will depend on the extent and duration of the outbreak and the damage to the global economy.

With businesses closed, a knock-on effect has been a collapse in advertising, which has in turn hit the media industry. This week, The Irish Times and the Business Post Media Group became the latest to introduce pay cuts and cost saving measures.

The Irish Times announced a temporary pay cut of up to 30 per cent for senior managers and editors in the group, while the publisher of the Business Post cut salaries by between 5 per cent and 15 per cent until the end of June.

It isn’t all bad news for businesses, with March the busiest month for grocery sales ever recorded as shoppers bought more than they did during the Christmas 2019 period.

Grocery sales reached €2.8 billion, which was up €250 million on the same period last year.

The average household spent an additional €122 on groceries as shoppers stockpiled some goods.

That being said, retailer Tesco expects to take a hit of up to £925 million (€1 billion) from the costs of dealing with the pandemic, while the virus also led Debenhams to close its chain in the Republic at the cost of 2,000 jobs.

Indeed, the Republic’s unemployment rate trebled to a record 16.5 per cent in March, which equates to just under 420,000 people being out of work.

To try to alleviate the pressure, the Government announced a major expansion of financial support for SMEs, with the total value estimated at €1 billion. However, it looks like the damage could be catastrophic.