Where will Ireland raise the billions to pay Covid-19 bills?

Availing of European rescue funds would send the wrong message 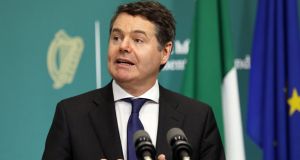 Minister for Finance Paschal Donohoe. The first official Government estimates of the cost to the State of the Covid-19 crisis will come in forecasts submitted to the European Commission this month. Photograph: Leon Farrell/Photocall

We don’t yet know the size of the bill the exchequer will face to pay for Covid-19. But we do know it will be enormous. Already some €9 billion in additional spending has been committed and there is more to come. A very serious hit is also coming to tax revenue – so the State’s books will be hit on both sides.

In starting to raise money to pay for this, Ireland got off to a good start this week as the National Treasury Management Agency (NTMA), which manages the State’s debt, raised €6 billion in borrowings at a negligible interest rate of less than 0.25 per cent. And some funding may now be available from European Union sources as a result of the agreement reached by EU finance ministers.

However, the Government will largely want to go it alone in raising funds and in particular avoid having to access the emergency funding lines put in place via the European Stability Mechanism (ESM), the EU rescue fund. The key during a crisis is to avoid drawing attention to yourself or being seen to be in trouble.We have seen before how quickly the market mood can turn.

It was a clever move to raise a large sum on the markets at this early stage – interest rates are at rock bottom and investors, like the rest of us, are still trying to work out what this all means. Crucially, the European Central Bank’s (ECB) recent announcement that it would move heavily into the market to keep interest rates low is a vital support and had dampened market jitters, for now anyway. It is also worth noting the extraordinary actions of the Bank of England this week, buying debt directly from the UK government, effectively financing the exchequer by printing money.

Countries could come under pressure in borrowing money from the markets if investors judge their finances are unstable and their ability to repay in doubt. Ireland’s job will be to stay on the right side of the line – to ensure investors keep faith in us. Minister for Finance Paschal Donohoe will point to the move of the exchequer finances into surplus. Ireland has a decent starting point.

But as will happen everywhere else, this crisis will blow a hole in our public finances. The first official Government estimates of this will come in forecasts submitted to the European Commission this month. It could well point to a possible deficit of some €30 billion, or about 10 per cent of GDP, adding significantly to our national debt.

Will Europe help? For the moment the ECB is the key player here for Ireland. For as long as this window of calm its actions have created continues, the NTMA will surely seek to pull in more funds.

The response of Europe’s politicians, however, has been disappointing. Yes, euro-group finance ministers reached a deal this week on the first phase of a rescue programme, but they did so only by papering over the cracks. Some measures will be useful for Ireland. European Investment Bank cash will help in making cash available for businesses, via the banking system. Ireland will examine how the proposed scheme to part-fund unemployment benefits and wage subsidy measures will work and could get some financing from there, though it would depend on the cost.

But the Government will not want to want to access the cash being made available via the ESM. Theoretically we could borrow about €6.8 billion in cheap loans to pay for healthcare and direct Covid-19 measures. But the optics of being seen to do this would be poor, unless a large group of EU states did likewise. Again, it is about not drawing attention to ourselves and not being seen to be part of a troubled cohort of countries.

The agreement by EU finance ministers is that this direct Covid-19 funding would not come with onerous terms and conditions, but that additional funding beyond this to support states in financial difficulty would. This would be hugely controversial in the likes of Italy and Spain. And it is the last place Ireland would want to go either, bringing back echoes of the troika.

The reality of Europe, however, is that financial solidarity will go only so far. You could argue that this is the inevitable result of the way the EU and euro zone work and the absence of a large centralised budget.

Despite this, the Government made the right call, in my view, in supporting calls for some kind of mutual debt-raising – so called coronabonds. This was a big political call by Donohoe and the Taoiseach – traditionally Ireland would be in line with the Netherlands on economic issues, but now we were siding with France, Spain and Italy.

While there are questions about how mutual borrowing would work in practice, it was surely politically the right call to support this direction of travel, given the social and economic devastation in countries such as Spain and Italy. In not signalling a bigger response, the finance ministers, while at least they have agreed something, fell short of what was needed. The interminable haggling seemed completely out of place against the backdrop of massive human devastation.

EU leaders have the chance to move further, with the prospect of a “recovery fund” on the table, a French proposal which could allow mutual fundraising to deal with the economic fallout. But with no agreement on how much this might be or how it might work, you wouldn’t be holding your breath for quick progress.

Ireland will hope to continue to make its own way through the financing of the crisis. We will want to stay a mile away from any rescue funds and the like. Keeping the head down and quietly raising as much cash as possible while markets stay calm will be the plan for now. But a long road lies ahead.