Affected woman says: ‘I’ve paid all my taxes and stamps in the South. Where has that money gone?’ 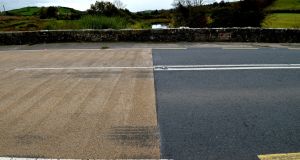 A border crossing point at Ballynacarry Bridge, Co Monaghan. Thousands of cross-border workers are being refused Covid-19 payments because they live in the North, TDs from the region say. File photograph: Alan Betson

Thousands of cross-Border workers are being refused emergency Covid-19 payments because they live in Northern Ireland, TDs from the region say.

Donegal deputy Thomas Pringle said he had been inundated with distressed people contacting him after being denied the payment. He said workers laid-off from the tourism, hospitality, retail and food sectors were most affected.

“These include people who have worked all their lives in the South, worked for 20 or 30 years, paid their taxes, paid everything. Now they are being excluded from the emergency payment simply because they live in the North,” he said.

Up to 30,000 so-called “frontier workers” live in one of the island’s jurisdictions and work in the other.

Under European Union rules, they were traditionally allowed to generate social insurance contributions in both jurisdictions which could be combined for entitlement to benefits and pensions, and exported to different EU states. However, the UK left the bloc on January 31st.

The Department of Employment Affairs and Social Protection confirmed the emergency Covid-19 payment is only available to people working and resident in the State. It did not respond to queries about the number of workers being denied the payment because they live in the North.

Under EU rules for frontier workers, the “competent State for a person living in Northern Ireland and working in Ireland who is laid off is the State of residence (in this case Northern Ireland) and they would not be entitled to the Covid-19 Pandemic Unemployment Payment,” a department spokeswoman said.

“Where a person who lives in Ireland and works in Northern Ireland loses their employment the State of residence is the competent State (in this case Ireland) and they can apply for the Covid-19 Pandemic Unemployment Payment.”

Mr Pringle said he had a conference call last Wednesday with department officials who “didn’t know anything about” the “great number of people” being refused the payment. Officials contacted him on Tuesday and confirmed that those resident in the North do not qualify for the payment.

“It makes a mockery of the Good Friday Agreement . . . as the Irish State, we should be making these payments available to all workers impacted,” he said.

He said many faced waiting until late April to find out if they will be paid under the UK system. “That means they have no choice but to get loans.”

Sinn Féin Donegal TD Pádraig MacLochlainn said “thousands of workers who have lost their jobs are being left to the dole in the North, and it is an absolute disgrace”. Basic unemployment payments in the North range from £57.90 (€65.40) and £73.10 (€82.57) a week.

“One worker laid off in Donegal is getting €350 a week while another working beside them has to claim maybe £70,” said Mr MacLochlainn.

Among those affected is Rosanne Martin (37) from Belleek, Co Fermanagh. She has worked as a hairdresser for 21 years in Co Donegal and her employer in Bundoran closed two weeks ago due to the Government’s pandemic advice.

She applied for the Covid-19 payment and said she heard a couple of days later “that the criteria had changed” and “you had to live in southern Ireland”.

“For 21 years I’ve worked between Bundoran and Ballyshannon. I’ve paid all my taxes and stamps in the South. Where has that money gone?” she said.

“I don’t know who to turn to or who to ask. I’m just hoping something changes, because I’m really stuck.”

Ms Martin said she could apply for support in the North, which she estimates would be around £90 a week given she has two children.