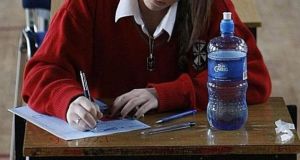 Many students will not be happy with the decision to delay the Leaving Certificate until later in the year. File photograph: PA

The move to delay the Leaving Cert exams brings much needed clarity for tens of thousands of anxious students.

But it also heaps even more pressure onto the shoulders of candidates who now face an agonising and extended wait until the exams begin.

Many of us feel scarred by our Leaving Cert experiences decades later.

Spare a thought for the class of 2020 who will have had it harder than any who have gone before.

They now face sweating it out until at least late July or early August - subject to public health advice - for the exams to begin.

This will, at least, give students a chance to resume school in July and catch up with some lost tuition time.

This is especially important for students who have lost out due to poor broadband connections or because schools are not well equipped to teach remotely.

However, as a survey by the Irish Second Level Students’ Union found, delaying exams is the least popular option.

Many cited crushing stress and crippling mental health difficulties as the main reason for not wanting delayed exams.

The reality facing policy-makers, however, is that there were not any good options.

Pressing ahead with exams in June was not possible, based on public health advice.

Another option was predicted grades, based on coursework completed by students to date.

The UK’s A-Levels, the International Baccalaureate and many other end -of-school exams have gone down this route.

This was tricky for a number of reasons: students haven’t completed enough coursework in many subjects to base a grade; many elements in teachers’ unions are vehemently against grading their own students for the purpose of State exams (even if this happens, quietly, for hundreds of students in exceptional cases each year).

While predicted grades could have changed the nature of Leaving Cert assessment in one bold leap - something which has been talked about for decades - the reality is the system was not ready for it and it would likely have caused uproar.

The delays to the exams, of course, will only work with the co-operation of teachers. The official line from teachers’ unions on Friday afternoon was that they will consider the decision and are committed to serving students’ best interests.

Even if there is some quiet grumbling from some individual teachers, it’s hard to see how unions could object.

Even in normal times, the State exams are a huge logistical challenge: millions of exam scripts and hundreds of thousands of grades are processed.

The delay makes organising the exams subject to social distancing measures an even more daunting prospect.

It may also prove even harder than normal to recruit teachers to correct the exams during August and September, especially if the marking process extends into the new academic year.

In addition, there will be pressure to ensure the correcting process is faster than usual due to the need to allow students commence third level and further education in the autumn.

Third level sources expect first year students may start their courses in October instead of September; some have indicated they could delay admissions until November, if required.

For some 60,000 Leaving Cert students, meanwhile, there is at last clarity.

Many will not be happy with the decision. Fairness is still a big question mark, given that some have benefitted disproportionately from the decision to give full marks to students for the orals; some have also lost out tuition time more than others due to the digital divide.

Postponing the exams, on balance, is the fairest option. It’s not ideal, but at least it gives students a chance to catch up and finally sit the exams they have been building up to for the past two years.