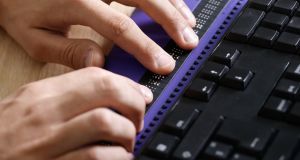 “I am totally blind and when I need assistance it involves bringing people into my personal space. I don’t want to ask someone to do that. It’s not fair on them or me.” Photograph: iStock

The decision by some HSE offices not to provide electronic fund transfers of crucial allowances is causing “unnecessary financial hardship” for blind people.

The National Council for the Blind of Ireland (NCBI) is appealing to the executive to ensure payment of the blind welfare allowance by bank transfer in all parts of the country during the coronavirus outbreak.

The allowance is a means-tested payment of up to €240 for a single person who is blind or visually impaired or €480 for a blind couple.

Though mainly issued by cheque by local HSE offices, most offices will provide the option of having the payment made directly into a recipient’s bank account. However, according to the NCBI, “some local HSE offices [ARE]unwilling to make this payment by bank transfer, which is placing thousands of people who are blind and vision-impaired at unnecessary risk and financial hardship across the country”.

One service user in the south-east who has been receiving the allowance weekly, by cheque, since 2009, said he had asked the local office to change the payment method to EFT so he could minimise his journeys out.

“The woman who called me back said she had checked whether it was possible and she said they weren’t prepared to. I explained my reasons, that I wanted to avoid going to the bank, that I was concerned for my own welfare but also for the people in the bank.

“I am totally blind and when I need assistance it involves bringing people into my personal space. I don’t want to ask someone to do that. It’s not fair on them or me.”

He said he normally lodged his weekly cheque when he received it. He could not afford to avoid the bank by waiting until the end of the pandemic to lodge cheques. “No, I need the money. I have bills.”

Kevin Kelly, head of advocacy with the NCBI said it was clear from calls received there was “a strong regional variation within the HSE” on the issue.

While some offices were providing EFT, others were “reluctantly offering to switch to electronic payment.

“Unfortunately the south east offices are refusing to pay the BWA electronically. This is both outdated and completely unacceptable, particularly given that we are in the midst of a national health emergency. Many of those who are in receipt of this payment rely on this income to meet their basic needs,” he added.

A spokeswoman for the HSE said: “Each local area has its own processes that dictate the method of payment”.