‘Druids danced in the streets’ when abortion was legalised, says priest 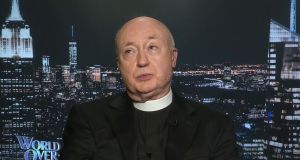 Fr George Rutler said the state of the Catholic Church in Ireland was “a warning to Catholics in the United States, because such is what happens when religion is only a political and ethnic sentiment”

Taoiseach Leo Varadkar was “elected while publicly living in perverse contempt of the sacrament of Holy Matrimony”, and “Druids returned and defiantly danced in the streets when abortion was legalised”, in Ireland, a Catholic parish priest in New York has said.

Fr George Rutler (73), pastor of the St Michael the Archangel church on West 34th Street in New York, said the state of the Catholic Church in Ireland was “a warning to Catholics in the United States, because such is what happens when religion is only a political and ethnic sentiment”.

In a message on the parish website, in honour of St Patrick “the holy patron of our archdiocese”, he noted how “the largest number of people who claim Patrick for their patron are Nigerians, converted by heroic Irish missionaries”.

“The number of baptised Catholics in Nigeria has soared from 19 million in 2005 to 53 million today. There are two thousand priests and nearly 4,000 religious, along with a boom in vocations.”

He continued: “By contrast, despite many worthy witnesses, the majority of Irish people failed to heed the warnings of St John Paul II when he became the first pontiff to set foot on the soil of Eire in 1979. He preached to 1.25 million faithful at a Mass in Phoenix Park, Dublin.

“Last year, Pope Francis offered Holy Mass in the same place, and fewer than 130,000 showed up. Four months later, the Druids returned and defiantly danced in the streets when abortion was legalised. The Taoiseach, was elected while publicly living in perverse contempt of the sacrament of Holy Matrimony.”

The national seminary at Maynooth “has the lowest numbers of students since its foundation in 1795”, he said while “its rector of 15 years abandoned the faith and now conducts an esoteric cult in Arizona”.

This was a reference to former president of St Patrick’s College, Maynooth, former Msgr Micheál Ledwith, who resigned in 1994 amid child abuse allegations which he denied. He later joined the Washington State based Ramptha School in Enlightenment in the US.

Fr Rutler continued that an unnamed “Irish commentator and playwright recently” had referred to Ireland as “the most anti-Catholic country on planet Earth”. Fr Rutler said he felt “this would seem to be hyperbolic, given persecution in Muslim lands, China and North Korea, but it bespeaks the adolescent rebellion of a population moved by an anger unlike the cool detachment of calculating governments”.

All of which, he said, amounted to “a warning to Catholics in the United States, because such is what happens when religion is only a political and ethnic sentiment”.

The St Patrick’s Day parade in New York city had become “a bibulous charade of St Patrick. While contingents advertise their contempt for his gospel, Nigerians honour St Patrick in a different way”.

Originally an Episcopalian (Anglican) priest, Fr Rutler converted to Catholicism in 1979. Since 1988 he has had a weekly television programme on the international US-based and conservative Catholic Eternal Word Television Network (EWTN).

In 1996, then Governor of Texan George W Bush made him an Honorary Texan and, for his help at the World Trade Centre on September 11th, 2001, Fr Rutler was honoured by the city council of New York.

He has lectured and given retreats in Ireland.