Emma Brady on feminism, her relationship with God and joining a ‘flawed’ church 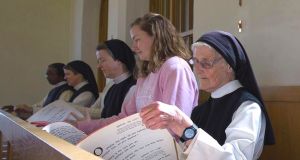 Emma Brady arrives in the parlour of St Mary’s Abbey, in Glencairn, Co Waterford, a coffee jug and a pack of Starbucks coffee in hand. “Do you want a cup?” she asks.

The 23-year-old, originally from Co Cavan, is six months into her postulancy, the initial period of training to become a Catholic nun. She graduated from Trinity College Dublin last year with a degree in law and German.

As she pours, she jokes: “Please, don’t ask me anything difficult.” I ask about Pope Francis’s comments, the evening prior to our meeting, when he described feminism as “machismo in a skirt”. But that does prove a difficult question for her. With her access to the internet limited to Saturday afternoons, and no phone, Brady missed the pope’s remark, leaving it to me to explain it to her.

Has her definition of feminism changed since entering St Mary’s?

Does she feel a conflict in entering a religious institution in 2018, knowing all she does about the church’s history of sexual abuse, Magdalene laundries and mother-and-baby homes?

“We’re called to be part of an institution that is flawed, and we’re human, so we have our faults and failings and limitations. I suppose in choosing or being called to be part of that institution we have to accept those failings and limitations. It mirrors our own limitations within ourselves and by accepting that, we’re really following the call of Christ and being part of what he instituted,” she says.

A self-described extrovert, Brady was heavily involved in university life during her four years at Trinity: joining the rowing team, going on nights out, dating, working and, of course, studying occasionally.

But she says that during this period she felt like she “was running around everywhere and never finding really what I was looking for”.

Having watched School of Love, a 2014 documentary about St Mary’s Abbey that aired on RTÉ when she was 18, Brady decided to visit and see whether the monastic way of life appealed to her. During college holidays she came to the guest house and engaged with the vocations director, to see “whether this is what God was asking of me and whether I was really myself here”.

After the guest-house period, she did “live-ins” with the community. This is where a person becomes “immersed in the life – working and praying with the community. You have a lot of time by yourself to pray and to really seek and ask God what is here for you or why this life is so appealing.”

Following numerous live-ins Brady was invited to take the next step of the application process, a psychiatric assessment. Throughout this time, she was still in college, and “living a normal life”, she says.

“Going out and having friends and travelling isn’t a contradiction of the Catholic faith. You can be faithful and live a normal life.”

After college she felt that the next step was to become a postulant, her current phase, which is fundamentally about asking and seeking. “It involves discernment with the community and seeing if you fit in to the demands of the life here.”

Brady finished college in May 2018 and became a postulant the following autumn, formally entering on September 8th.

The abbey is part of a Cistercian order, based on a stricter branch of the rule of St Benedict: prayer in community seven times a day, the first one at 4.10am, manual labour and lectio divina, which involves learning about catechism, liturgy, music, monasticism, the Cistercian way of life and the history of the order. This is a so-called “enclosed order”, where contact with the outside world is limited.

It is not often that the order accepts postulants as young as Brady, I am later told by Sr Sarah, the postulant director. Community life for Cistercians is “more involved” than other Catholic orders, and Brady was given the option of returning in a few years. But ultimately, “it was God’s timing”, says Sr Sarah.

“When you discover what you perceive God to be asking of you, it’s very difficult to try and suppress that urge,” Brady says.

Despite the commitment she has already made – 10 months of postulancy, initiating the six years before becoming a professed nun – she is undaunted. “It’s important to remember that it is still a process of discernment. It was a big decision to enter and it’s a decision again to become a novice and to ask the community for that. I suppose I can only take it day by day and see where God is leading me.”

Having entered the monastery of 26 nuns, plus herself and her colleague Grace, the decision to continue is a holistic one, made by her and the community as a whole. However, the decision to enter initially is made alone.

“It’s about my relationship with God and what God is asking of me rather than what I think other people expect of me.”

Did her parents have a role in her decision? Brady laughs: “No. This wouldn’t have been the life that they would have chosen for me at all,” she says. “I’m grateful for the support they’ve given me and also for their questioning towards it, because it made me question myself too. It made me wonder whether I was really determined and resolute in pursuing a monastic vocation or whether I should really do something else. I wouldn’t say they’re happy but they’re supportive because they’re good parents.”

Aside from some minor changes made as a result of Vatican II in 1959, the role of Cistercian nuns has remained virtually the same since 1098, the year that St Benedict wrote his rule and the foundation of the Cistercian order.

The amendments mean Brady won’t experience some of the strictness her colleagues were subject to. Earlier, an older nun told me she was given leave last year to visit her ill sister, something she couldn’t have imagined being allowed to do when she first entered.

'The MeToo movement can’t help but have a positive impact on women in every walk of life, not just in the church'

By contrast, Brady was allowed out to attend her college graduation, something she “really enjoyed”. Although she was grateful for the chance to see her friends and family again, ultimately she was happy to “return to real life and reality here [in Glencairn]”.

Has being in Glencairn tested her friendships outside the abbey? Brady forgoes emails in favour of letters, a decision she believes leads to a “deeper” relationship with people who choose to write.

“It’s difficult in a way that you have to be committed and you have to hope that your friends are patient enough to wait for letters and then you know there’s a beautiful intimacy, because the people who who make the effort and share of themselves through writing give so much, and I receive so much from them too.”

The role of women in the church is an increasingly prevalent theme outside the confines of Glencairn. Within these walls, though, Brady points out that women take the helm at every juncture – apart from at Mass on a Sunday.

Does she think there will or should be female priests? Here she is reticent. When I ask about the public comments of former president Mary McAleese, she says she doesn’t “know anything new about her”.

Instead Brady focuses on what she calls “the sort of radical feminism in monastic life” and expresses the view that “the value of our lives as women in the church is insurmountable.”

Brady is optimistic for women in religious life: “The MeToo movement can’t help but have a positive impact on women in every walk of life, not just in the church. We’ve already seen the positive effects of it in empowering women to come forward and and I suppose the church is embraced in that too.”

The Irish-American who led the last invasion of Britain
6

Taxis under pressure to switch to electric
8

Irish people ‘are interested in chatting, but the friendship doesn’t last long’
9