‘My hope is to shift the public and then the political discourse,’ says charity’s chief 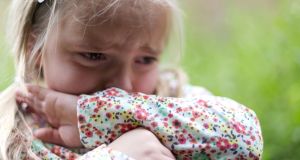 Barnardos said that children who don’t get the correct services in time are far more likely to ‘engage in risky behaviour’. File photograph: Getty Images

The needs of the most vulnerable children in Ireland are not being met because they are “too difficult to think about”, the new chief executive of children’s charity Barnardos has said.

Calling for greater “realism” in policy debates, Suzanne Connolly said: “I want to be part of talking about the complexity of these issues. I don’t want to be simplistic in my advocacy for these children.”

Ms Connolly was speaking in the wake of concerns voiced by some staff members of the charity about a decision to close its campaigns department.

A briefing to staff last month said: “Barnardos will no longer take an ‘all children’ focused political mobilisation approach in our advocacy work”, shifting its focus to services and particularly to a “new trauma informed approach . . . to working with vulnerable children”.

Three of the four posts in the campaigns and advocacy department were made redundant.

Staff who spoke to The Irish Times described their shock and disappointment, claiming Barnardos would cease to be a public advocate for children on issues like child poverty and educational disadvantage it had been under Ms Connolly’s predecessor Fergus Finlay.

However, Ms Connolly – who took over at the 400-strong organisation last October – said “our advocacy has not been sufficiently grounded in what we do and what we are seeing on the ground. I want to shift that.”

Coming from the perspective of a social worker and former head of children’s services at Barnardos, what she sees on the ground is that families experiencing trauma are not getting the supports they need to protect their children.

There is a widespread failure, she believes, among services and policy-makers in the State to appreciate just how profoundly many parents, who experienced trauma as children themselves, struggle to parent.

She has studied the long-term impact of cumulative adverse childhood experiences, particularly acrimonious parental break-ups, domestic violence and parental addiction, on the developing brain. She warns that children who don’t get the correct services in time are far more likely to “engage in risky behaviour including addictions, unhealthy relationships, criminality and have early deaths”.

These young adults go on to have children in households “full of toxic stress”.

“Children in those environments, without supports, will be hyper vigilant, probably trying to protect their parents, probably won’t know how to judge danger or safety of environments correctly. They may lack trust . If they start off their lives like that, how will they develop healthy relationships, and parenting? It becomes multigenerational.

These issues are “not easy” she argues, requiring a “long-term view of the supports really vulnerable families need, to change”.

“It’s not so much that services are wrong but that people forget the reality of people’s lives . . . Their lives are often too difficult for people to think about.

“But I want to bring realism to the conversation talk about what these children need, what works and what doesn’t.”

First on Ms Connolly’s agenda will be to ensure all Barnardos staff are trained in this trauma-informed approach and to get the HSE and Tusla funding for Barnardos services – which was cut in 2008/09 during the austerity era – reinstated. “We are €1.2 million a year short,” she says. “We haven’t been vocal enough about those cuts.

“Longer term, I want a shift in public discourse about the most vulnerable children, and their parents. I want us to understand why families are vulnerable. People don’t become addicts because they are happy.

“Their children aren’t victims needing to be rescued, but they do have challenges and they do have a right to support.

“My hope is to shift the public and then the political discourse.”

Asked whether stepping back from campaigning on child poverty and homelessness amounts to a retreat from public discourse, she says the structural issues, like increasing inequality are “of course important”.

“But the challenges are not just economic. They are social and emotional as well. How can we mitigate the structural inequality for the most at-risk children? My answer to that is services. I will be advocating loud and clear for what these children need.

“I am absolutely going to be a sharp thorn in the side of politicians and civil servants as I will speak from a position of having done this. I know what I am talking about.”