Life after direct provision: ‘I see myself as Irish and also Pakistani’ 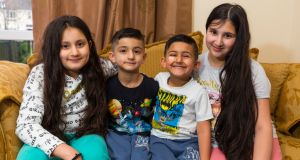 Alishbah Idris has never invited a friend home after school.

Up until a couple of months ago the 12-year-old sixth-class student shared a tiny box room with her younger sister Aliza. Her two brothers were crammed into the next door bedroom and her parents slept in the living area of the caravan.

It was a small, crowded home and Alishbah felt ashamed to bring friends over.

“Only four people knew where I lived. Three of them knew because they used to live here too and know how it feels. I never wanted to bring anyone over. We had no privacy and everyone could see what you were doing.

“I felt ashamed and embarrassed about it.”

Alishbah spent the first 12 years of her life in direct provision, most of it in a mobile home at the Athlone Accommodation Centre for asylum seekers. She and her three siblings were born while their parents were going through the asylum process.

As she grew older Alishbah realised she was different from most other kids at school. However, she avoided asking her parents too many questions about their living circumstances.

“I didn’t ask because I knew they would get mad or sad about it. I felt like it would be rude and really mean to ask. They would feel bad for themselves and ask ‘why did we do this?’ So that’s why I never asked.”

Ahmed and Nazia Idris arrived in Ireland in January 2007 seeking asylum. The couple say they were forced to leave their home in Pakistan after Nazia’s family, who are Shia Muslims, rejected her marriage to Ahmed because he was Sunni.

They paid a smuggler to flee the country and applied for protection in Ireland in 2007.

The initial application was refused but they appealed the decision. The appeal was rejected so the family applied for leave to remain and subsidiary protection in 2009.

I want to be a lawyer so I can fight for people. I feel everyone has rights and they shouldn’t be quiet and have to give up. They should fight

This request was also refused and in 2012 the family received a deportation order. They appealed the order and spent the following five years waiting for a decision.

In late 2017, nearly 12 years after arriving in Ireland, the deportation order was dropped and the family received leave to remain in Ireland.

Nearly 5 per cent of people in direct provision (309 people) have been in the system for seven years or longer, according to the Department of Justice.

In December 2018, the Idris family moved into a four bedroom home on the outskirts of Athlone.

After refusals by dozens of landlords, many of whom insisted on a reference from a previous landlord, Ahmed eventually secured a home when a friend living in the same estate recommended the landlord rent to the Idris family.

“It was very hard to find accommodation,” says Ahmed.

“Landlords just asked for documents I couldn’t provide. We searched for six or seven months. There were lots of people queuing outside homes and offering to give extra money.”

Ahmed has found part-time work at a local grocery store in Athlone and one day hopes to open his own fruit and vegetable store in the town.

He’s relieved the asylum ordeal is finally over but is anxious to regularise his children’s nationality. In order to acquire Irish citizenship a person must have five years “reckonable residence” – or lawful residence – in the country.

However, time spent in direct provision tends not to be factored into this period which means his children, all born in Ireland, still have to wait just under four years before they can officially become citizens.

Alishbah now has her own room where she listens to music and practices her flute. She will begin secondary school next September and already has plans to study law at university.

“I want to be a lawyer so I can fight for people. I feel everyone has rights and they shouldn’t be quiet and have to give up. They should fight.”

She regularly chats to her grandmother in Pakistan using WhatsApp and speaks Urdu with her parents. However, asked whether she feels more Irish or Pakistani the young Athlone school girl shrugs her shoulders.

“I really don’t think about it. I suppose I see myself as quite Irish and also Pakistani. I know I have origins from other places but it doesn’t change who I am. I’m still human.”