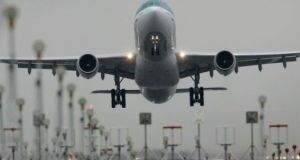 Between 200 and 250 people a day are arriving in Ireland from the United States, with many transatlantic flights operating at a fraction of their capacity, the Minister for Foreign Affairs has said.

Speaking at a briefing after the Cabinet met on Monday, Simon Coveney said the figure of arrivals was in the context of around 4,500 people a day arriving into the State.

“One of the flights from Dallas, for example, which has been the subject of some tension in the media and social media, there was only sixteen people on that flight.” Mr Coveney also said most passengers arriving from the United States were Irish people coming home.

Mr Coveney said while international travel remained the “most significant risk in Ireland now to the re-emergence of this virus”, other considerations had to come into the equation, such as retaining connectivity as an island.

“We need to put this in perspective - of course we need to make sure we take a public health approach first but also a pragmatic approach after that to try and ensure we maintain connectivity as an island.”

Mr Coveney emphasised, however, that people arriving into the country who were found to have knowingly filled in the passenger locator form with inaccurate data could face a fine, or imprisonment. “If you’re lying to us, you’re breaking the law, and that’s a very clear message that comes with the legislation that underpins the passenger locator form and the obligations that come with it.”

Opposition politicians have called on the Government to temporarily suspend flights from the United States and publish a “red list” of countries with high rates of infection.

Duncan Smith, the Labour transport spokesman, called for the suspension of flights from the United States “and other Covid-19 hotspots” until a mandatory Covid-19 testing regime is in place at Irish airports.

“There is huge public concern at the arrival into Ireland of visitors from the United States, and the total lack of enforcement of the 14 day mandatory quarantine period. The current rules are unworkable and unenforceable, and the public are rightly upset about this.”

“The pandemic is out of control in large parts of the United States, and all our hard work to protect our most vulnerable is now at risk if visitors from there to Ireland don’t follow the recommended 14 day quarantine,” he said.

Sinn Féin’s transport spokesman, Darren O’Rourke, said a traffic light system should be introduced for different countries, with a graded level of restrictions on entry into the State depending on the prevalence of the virus in the country where travel originated.

Mr O’Rourke said there is a “lack of clarity and policy coherence in relation to checks and controls and ports and airports”.

Róisín Shortall, the Social Democrats co-leader, also called for the introduction of a red list. She said that the presence of visitors from countries also had the potential to damage people’s interest in domestic tourism within the country.

“We are the only EU country allowing in US tourists,” she said, adding that the current regime is “unenforceable”.

She said people coming from countries on a “red list” should either have to stay in a mandatory quarantine for a period of weeks, or be tested on arrival, and tested again after several days. A second negative test would see their quarantine lifted.

She said there is a “real risk of drifting into a second wave” due to loose travel restrictions.

Mr O’Rourke said the current checks on incoming travellers who have filled in the Covid-19 passenger locator form were “tokenistic”. His party colleague and tourism spokeswoman Imelda Munster said it would be “pretty naive for anyone to think any tourist coming for a week or a fortnight is going to self-isolate”.

The overseas tourism body has also placed a message about the 14 day quarantine advisory on its main website and foreign language versions. Asked if Tourism Ireland would place advice about quarantine rules on its advertising when it resumes, a spokeswoman said only that its advertising would not be reactivated until travel to the State is again safe.

The Government is examining a series of measures to improve compliance with the 14 day voluntary quarantine, including increased checks and the insertion of the passenger locator form into online booking processes.

Minister for Health Stephen Donnelly said on Sunday that he wanted airlines and tour operators to ensure their customers knew about the 14 day isolation before they arrived in the country.