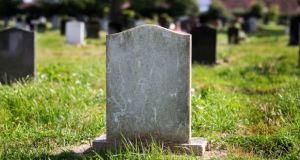 The family of Irish-born Margaret Keane want the words ‘In ár gcroíthe go deo’ to be on the headstone on her grave. File photograph: iStock.

A Church of Ireland bishop has challenged an English counterpart over a ruling that an inscription in Irish on a gravestone in a Coventry churchyard must be translated to ensure it is not mistaken for a political statement.

Bishop of Cashel, Ossory and Ferns Michael Burrows said the controversy raised “serious issues in terms of cultural respect between our islands which go to the very heart even of the delicate Irish peace process”.

The decision could “reignite the notion that one of the ancient languages of these islands, the original language of hymns like ‘Be thou my vision’, is to be regarded by the Anglican Church not as a vehicle of spirituality but of its very nature as an instrument of politics. And to that assertion we feel bound stridently to object,” Bishop Burrows said.

The family of Irish-born Margaret Keane (73), who died in July 2018, wanted the words “In ár gcroíthe go deo” (“in our hearts for ever”) on the stone above her grave at St Giles burial ground in Exhall, Coventry.

Stephen Eyre QC, judge in a Church of England ecclestiastical court, ruled a translation of the inscription must also be included as there was a risk it could otherwise be seen “as a political statement”.

In an open letter to Church of England Bishop of Coventry Christopher Cocksworth, who has jurisdiction over the churchyard, Bishop Burrrows said that to insist on the translation diminished “the identity of an Irish woman who no doubt had lived happily in England for many years but who wanted to be permitted an uncomplicated reminder of her roots at the last”.

Bishop Cocksworth said he was “deeply saddened whenever people’s identity is hurt or offended”.

He said he would make sure the family is made aware of its “legal rights according to the procedures of the Consistory Court”.

Mrs Keane’s family have appealed against the decision.

In his letter, Bishop Burrows noted that a key aspect of the peace process had been “to make clear that Irish language and culture can have a legitimate place in the richness of the British polity”.

He wondered whether Mr Eyre was “mindful that Irish is used to a significant degree in the part of the UK known as Northern Ireland?”

He noted how “during her memorable and wonderful visit to the Republic of Ireland in 2011, Her Majesty Queen Elizabeth graciously chose to use a few words of Irish to begin her speech in Dublin Castle.

“Those few words meant so much to their hearers, and no one can ever accuse Her Majesty of using language politically.”

The Queen’s “use of a mere phrase in Irish poured balm and healing upon a demanding moment. In a similar way, perhaps a few words in Irish used utterly apolitically in a Coventry churchyard in memory of Margaret Keane might offer balm and healing to her family in their loss, and encourage passers by to contemplate admiringly the rich variety of tongues and cultures that contribute to life in the Spirit in the islands we all share,” Bishop Burrows said.

As patron of the Irish Guild of the Church, Cumann Gaelach na hEaglaise, which has been promoting the use of Irish in Anglican worship in Ireland since the early 1900s, Bishop Burrows said “it should be noted that our endeavours go back over a century, long preceding the partition of Ireland and the departure of what is now the Republic of Ireland from the United Kingdom.”

“The judgment is that an imaginary person, at some time in the future, might see ‘You live on in our Hearts’, written in Irish, not understand it, but just presume it must be political, since it’s Irish and then...what?... feel uncomfortable? Unsettled?” he said on Twitter.

“So the family don’t get to give the tribute they want to their beloved mother because we apparently have to protect the feelings of some imaginary idiot in the future who can’t imagine the Irish language can carry any human emotions other than ‘Tiocfaidh ár Lá’.”