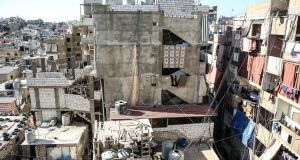 More than 200 Syrian refugees currently living in Beirut have been cleared to travel to Ireland once Covid-19 travel restrictions are lifted, the head of the Irish Refugee Protection programme (IRPP) has said.

Speaking as part of a webinar on the national statuses of migrants in Ireland and the European Union, IRPP director Eibhlin Byrne said 227 people in Lebanon – all Syrian families – had been interviewed and selected for resettlement in Ireland.

An Irish mission travelled to the Lebanese capital in early 2020 with a view to selecting around 400 people for resettlement. The mission was cut short by the outbreak of the coronavirus and Irish officials conducting interviews in Beirut flew home.

However, before leaving, the team had already selected a group of Syrian families who will travel to Ireland once restrictions have been lifted. It’s understood the families will not travel until after the now required two-week quarantine period is lifted.

The selection of families for resettlement is part of the second phase of the IRPP which was announced last December and commits to welcoming up to 2,900 Syrian refugees into Ireland between 2020 and 2023.

The Government committed in September 2015 to accept 4,000 people into the country as part of the first phase of the IRPP and in response to the Mediterranean migrant crisis. Some 3,788 people had arrived in Ireland by December 2019 when phase one closed.

Ms Byrne told last week’s European Migration Network webinar, which was organised in collaboration with the Economic and Social Research Institute (ESRI), that there were now eight families, comprising 30 individuals, living in Dunshaughlin, Lismore, Carrigtwohill, Middleton, Clane, Kinsale, Rathgar and Kells as part of the community sponsorship strand of the IRPP.

The Government has said it plans to house about 100 refugees each year between now and 2023 through community sponsorship arrangements with Irish towns and cities. “The programme appeals very much to the volunteering tradition in Ireland, it’s a really unique way of allowing people to engage in a world problem,” said Ms Byrne.

A number of Irish communities who were awaiting the arrival of a Syrian family in early 2020 have been forced to put the project on hold because of Covid-19, she added.

Ms Byrne acknowledged that the lack of housing supply in Ireland continued to pose a problem for refugee resettlement. However, houses in six counties have been made available for 59 families who will move from the emergency reception and orientation centres (EROCs) where they are currently living to these homes once virus restrictions are further lifted, she said.

Enda O’Neill, head of the UN Refugee Agency in Ireland, told the webinar countries who had closed their borders because of the pandemic should make “an explicit exemption for asylum seekers”.

He said there had been a 35 per cent drop in applications for asylum to Ireland between January and March of this year, reflecting the international barriers to travel during the health crisis, but urged the State to continue processing claims to avoid a backlog in applications.

Trinity law professor Patricia Brazil, who presented to the webinar on the Irish asylum process, noted the increase in numbers of people being granted permission to remain in the country under Section 49 of the 2015 international protection act.

Permission to remain is considered on humanitarian grounds when a person has applied for international protection but receives negative decisions through the refugee and subsidiary protection strands of the process.

In 2019, 435 people received permission to remain in Ireland including 60 people from Zimbabwe, 60 from Albania, 60 from Pakistan, 40 from Nigeria and 30 from Malawi, according to data presented by Ms Brazil.

In 2018, 238 people were granted permission to remain and in 2017 there were 72 people granted status under the new system.