Clerical abuse survivor: ‘The protections weren’t around when I was raped’ 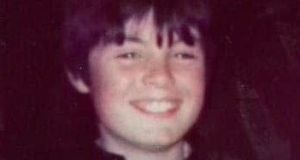 Darren McGavin’s abuse by Tony Walsh ended when he was 11 years old.

Ahead of the Vatican conference on abuse in the Church, The Irish Times speaks to clerical abuse survivor Darren McGavin

Darren McGavin is now 47 and still in recovery. He suffers bouts of depression but takes his medication and attends counselling. He also still attends psychiatrist Dr Ivor Browne who, by now, is as much a friend and mentor, as a doctor.

His abuse by Tony Walsh ended when he was 11 but it was 10 years later before he did anything about it. The intervening years were marked by much drug abuse and as many as “five or six” suicide attempts.

Then he decided enough was enough and went to the Garda, who were sympathetic and supportive from the beginning. That was in 1993. It would take 17 years for them to successfully prosecute the case against Tony Walsh, but he and they persisted.

Mr McGavin has had a series of relationships. With one long-term partner he had two children, both now adults, and a third child with a more recent partner. Currently he is not working but is attending “a lot of self-help courses”.

He recently met the Catholic Primate Archbishop Eamon Martin, who has been having face-to-face meetings with abuse survivors all over Ireland, in advance of his attendance at the Protection of Minors in the Church meeting at the Vatican this week.

The seminaries are empty . . . belief in the church is diminishing daily

In preparation Mr McGavin had pre-prepared answers to five questions he had been sent in advance of the meeting. He worked on them over three days and reduced 40 foolscap pages of replies to five pages.

They asked (1) his view of “the situation in Ireland now in relation to the abuse of children by priests or religious”. He replied “the seminaries are empty . . . belief in the church is diminishing daily . . . next to be affected will be sacraments of Baptism, Communion, Confirmation and funerals”.

Next was (2) “What or where are the areas where children are most at risk of being abused in Ireland today?” He listed off just about everywhere children are gathered. (3) “How and why has the church failed in protecting children from abuse or in dealing adequately with reports/disclosure of abuse?”

In this reply Mr McGavin called for transparency, accountability and truth, what he described as Tat, the lack of which was behind the church’s failure in the context.

On (4), “What were the most effective preventative measures, if any, that the church in Ireland has adopted to protect children from abuse in the church?” he responded how, unfortunately, protections “were not around, or in place, at the time and times of my and many other survivors’ multiple abuse and rape. But these are now eloquently and beautifully displayed to read or download from the internet free of charge.”

To the last question (5) “If you had a chance to say one thing to Pope Francis about the issue, what would it be?” he answered “Your Lord Jesus Christ is very much alive within you. Do for him as he has taught you according to the word of God and fear not the condemnation for doing his work here on earth. For you will be rewarded in heaven . . .”

Where the Irish church is concerned – and Darren McGavin has been dealing with it on the abuse issue since 2008 – he feels that at Archbishop House in Dublin there is a need for survivors not to be met just by clerics and administration staff, but also by “someone of substance from a survivors’ group”. He felt this would help particularly where false claims or allegations are made.

There was also a need for follow-through from psychotherapy, he said. Internationally he felt that what could be achieved in a four-day meeting at the Vatican was “minimal”, it was so short. “I definitely feel it’s a smokescreen,” he said.

He found Archbishop Eamon Martin to be “open, sincere, non-judgmental, and at times when I was speaking he was shocked and taken aback. I was coming from a positive side and I don’t think he was expecting that.”

The archbishop told him that “even if nothing happens over here [Rome], he was only one man and would I be willing to work with him when he comes back, and I told him I would be”.

Then “we were talking about [Archbishop of Dublin] Diarmuid Martin resigning and I said I wouldn’t let him resign. He’s done too much work, from my point of view as a survivor, to just walk away from it.”

He continued: “I see the issue with Diarmuid as his colleagues, fellow priests and Ministers have failed him because of their disbelief in the allegations. I feel the pope asked him to do a monumental job that the Pope [John Paul] couldn’t even do himself but they bound his hands and gagged him to a certain extent.”

He suggested to Archbishop Eamon Martin “that if he had a chance to speak to the pope around that, then maybe take Diarmuid Martin out of his position here in Ireland and put him somewhere safe where he can do that work with likeminded archbishops, where they are free from condemnation and negativity.”