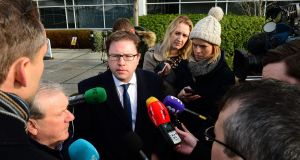 Emergency talks are under way to secure the future of a company which administers half of the €150 million JobPath back-to-work programme.

The company, Turas Nua, has been caught up in the administration of UK contractor Working Links, which owns 50 per cent of the Irish entity.

It is understood that FRS Recruitment, an Irish company which controls the remaining 50 per cent of the company, is in talks with the administrator of Working Links about taking over the UK entity’s share of the joint venture.

Turas Nua is one of two private sector entities appointed to run the JobPath programme. It has been paid €75.7 million so far under the scheme.

A spokeswoman for the Department of Employment Affairs and Social Protection said there was no current risk to the operation of the JobPath programme arising from the issues at Working Links, which was placed into administration last Friday.

“The Department of Employment Affairs and Social Protection has a contract in place with Turas Nua, and not with Working Links,” the spokeswoman said.

“Officials in this department are aware of developments in relation to Working Links, and have received assurances from Turas Nua that the JobPath contracts will continue to operate as agreed.”

Accounts filed for Turas Nua suggest the company was reliant to a large degree on forbearance and financial support from Working Links during 2017. The auditors of the company stated the “validity of the going concern assumption is dependant on the continued support of Working Links (Employment) Limited”.

The UK company, the auditors say, had written a letter stating that it would not seek repayments of millions of euro it was owed in debt until Turas Nua was in a position to pay, while it was prepared to “provide sufficient capital and resources to the company to fund [its] capital and trading requirements”.

According to the accounts, the company was projected to make a loss of €1.8 million in 2018. However, a company source insisted that much of the €9.6 million owed by Turas Nua to Working Lives had now been paid back. The source insisted that Turas Nua does not need the financial support of Working Links in 2019, and was able currently to stand on its own.

The JobPath programme has divided opinion since its inception, with critics claiming it dehumanises long-term unemployed people. Academics from Waterford IT told an Oireachtas employment committee last month JobPath users they had interviewed described feeling they were in a system which “actively and capriciously patronised, cajoled, threatened, manipulated and bullied them”.

However, Minister for Social Protection Regina Doherty has said that preliminary results from an unpublished report on JobPath have led her to believe that JobPath was delivering value for money, while surveys of users undertaken by the department have generally been positive.

In the UK, Working Links is one of the largest private sector providers of probation services, running three “community rehabilitation companies”(CRCs), privatised services to supervise low and medium-risk offenders.

In the immediate aftermath of Working Links’ administration, the British chief inspector of probation said the company’s CRCs were “inadequate” and that inspectors found “professional ethics compromised and immutable lines crossed because of business imperatives”.

The Fianna Fáil spokesman for research and development, James Lawless, said that Working Lives’ collapse called into question the “privatisation of welfare”.

“It further demonstrates the Fine Gael ideological view that the private sector will deliver what should be a more rounded, community-based scheme. It shows how out of sync they are with the needs of individuals and organisations, particularly in rural Ireland.”