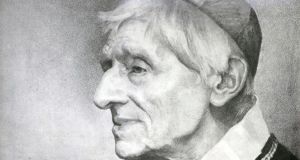 Pope Francis has approved the canonisation of Blessed John Henry Cardinal Newman, first rector of the Catholic University of Ireland.

The move means the English theologian and former priest of the Church of England, who converted to become a Catholic and rose to become a cardinal, is certain to be declared a saint, possibly later this year by Pope Francis.

Newman was best known in Ireland for his role as the first rector of the Catholic University of Ireland, later University College Dublin.

In 1851, six years after he converted to Catholicism ,Newman was invited by Cardinal Paul Cullen to oversee the new Catholic university. The university aimed not just to create a Catholic professional class, but to establish the intellectual headquarters for Catholics of the English-speaking world.

Newman ran the university in the Oxford style, setting up houses at 86 St Stephen’s Green, also known as St Patrick’s or University House; 16 Harcourt Street, known as St Lawrence’s; and 6 Harcourt Street, known as St Mary’s. He also delivered lectures at the Rotunda, Dublin on five consecutive Mondays during May and June 1852. When later published, these lectures formed part of the Discourses of his book The Idea of a University.

As well as establishing the Catholic University Medical School, Newman also proposed a faculty of law and appointed a professor of engineering. He employed architect John Hungerford Pollen to design University Church, on St Stephen’s Green, which opened in 1856.

Despite these achievements, however, the university degrees were not recognised by the State and so the university did not receive State funding. Newman resigned in 1858 somewhat frustrated that he didn’t meet his and Cullen’s objective of creating the intellectual headquarters for Catholics of the English-speaking world. Cardinal Cullen, however, enjoyed some success in later placing Irish bishops in key locations across the British empire while Newman returned to England.

In 1879, Newman was appointed cardinal by Pope Leo XIII in recognition of his services to the cause of the Catholic Church in England. He was proclaimed venerable by Pope John Paul II, after a thorough examination of his life and work by the Congregation for the Causes of Saints.

Two miracles necessary for his canonisation were put forward. The first of these was the case of Jack Sullivan, a man studying for the diaconate in Boston, Massachusetts, who was on the verge of complete paralysis in 2001 when he claimed to have been miraculously healed after praying to Newman. A second miracle, approved by the Vatican in November 2018, concerned the healing of a pregnant American woman from a life-threatening condition.

Newman was beatified on September 19th, 2010 by Pope Benedict XVI on a visit to the UK and on Tuesday Pope Francis authorised Cardinal Angelo Becciu, the Prefect of the Vatican Congregation for the Causes of Saints, to promulgate a decree of sainthood.

The pope also approved the decree of sainthood on an Indian nun, Sr Mariam Thresia Chiramel Mankidiyan, the founder of the Congregation of the Holy Family (CHF).

The nun, belonging to the Syro-Malabar Catholic Church, was born in Puthenchira on April 26th, 1876 and died in Kuzhikkattussery on June 8th, 1926.