Vacant Victorian Dublin flats to be redeveloped for social housing 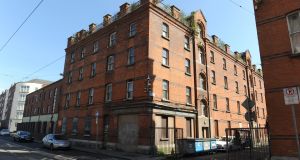 A Victorian flat complex in Dublin’s north-west inner city, that has lain derelict since it was severely damaged by a fire in 2005, is to be redeveloped for social housing.

Tuath Housing Association is to refurbish Ellis Court, a former Dublin City Council complex on Benburb Street, close to the National Museum at Collins Barracks and Croppies Acre park on the River Liffey, at a cost of about €6 million.

The four-storey complex of two redbrick blocks, constructed in the 1880s, was one of the first purpose-built Dublin Corporation flat complexes .

The council had moved most of the tenants in the early years of the last decade in preparation for a refurbishment programme. However, a few days before Christmas in 2005, a fire broke out in a ground-floor flat causing extensive damage to the building.

The extent of the damage meant that the planned renovation had to be put on hold pending a reassessment of the work required. The complex was boarded up, and some work was done in the preparation of new proposals, but funding was cut back when the recession hit and the block remained vacant.

Last year the building was placed on the council’s register of vacant sites valued at just over €2 million. It is one of 20 city council-owned properties on the register.

The council now plans to sell the buildings to Tuath for €2,794 to allow it to redevelop the complex. Tuath has already secured planning permission for the work, which involves the refurbishment of the old flats and the construction of an extension to provide six one-bed apartments, 13 two-bed apartments, two two-bed townhouses and one three-bed townhouse. Once built the 22 new homes will be allocated to applicants on the city council’s housing waiting list.

Tuath said tenders to build the scheme were this week received from contractors and it hopes work will start before the end of May. The work is due to take about 20 months, and it is expected that tenants will move in before the end of 2020.

Nick Sheward director of construction and property services with Tuath Housing Association said the organisation was keen to see a historic housing complex restored to use.

Ellis Court is one of three early social housing on Benburb Street designed by Dublin City Architect D J Freeman in 1885. Despite being unoccupied and damaged by fire, the buildings retain much of their early fabric.