Vitriol that emanated from the altar remarkable in its unvarnished hatred

The testimonies of three survivors of the mother and baby home institutions in Ireland - a mother, adoptee, and an adoptee’s family - in a mini-doc that accompanies Caelainn Hogan’s investigative book documenting the “shame-industrial complex.” Video: Dave O’Carroll/Philip Blake/Caelainn Hogan 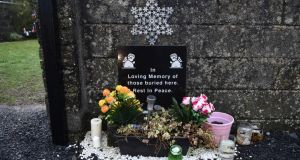 A memorial marks a mass burial site at what was formerly the Bon Secours mother and baby home in Tuam, Co Galway. Photograph: Charles McQuillan/Getty Images

One of the consistent themes in the various reports relating to the experiences of Irish institutionalisation is the historic preoccupation with “avoiding public scandal”. But what if it was too late and the scandal had already occurred?

One of the archival files in the diocesan archives in Tuam and included in this week’s report of the Commission of Investigation into Mother and Baby Homes relates to February 1935, when the parish priest of Westport wrote to the archbishop of Tuam: “I have the very unpleasant duty to report . . . that an illegitimate child was born to a girl named [full name given] in this parish, living about three miles from here. The child lived only a few days and was not brought to the church for Baptism. It was given lay Baptism. The guards exhumed the body and the medical evidence showed it died from natural causes. A denunciation will take place on Sunday next.”

The welfare of the girl who had just given birth and lost her newborn mattered not a jot. Another of the Tuam archival files is titled “Scandal in the parish” and relates a to a letter read from the altar by the parish priest of Cornadulla, who reported it had a “profound effect on the congregation”.

The purpose of these denunciations is also clear from the report. A 1934 conference in Tuam instructed that “Whenever an illegitimate birth occurs in a parish, and is publicly known, the scandal ought to be denounced without mentioning names, with a view to calling the guilty to repentance and as a deterrent to others. The denunciation ought to be in sorrow more than in anger and the preacher ought to point to the scandal as a grave sin against the sacrament of Matrimony and against the Sixth Commandment, a degradation to the family, a disgrace to the family, and as a sin against the good name of the locality.”

Methodology, evidence and tone are central to the compilation of commission reports and there are inevitably divergent views on whether the authors of the current report got these things right.

One witness recalled a girl dying in a mother and baby home during childbirth and that 'the girls’ parents would not take her home, even in death'

A text that only focused on church and State would not be satisfactory, but does the pendulum of the latest report swing too far in asserting that responsibility for the harsh treatment of the women “rests mainly with the fathers of their children and their own immediate families”?

There is no doubt, as pointed out in a Department of Justice memorandum in 1930, that “many unfortunate mothers are denied the shelter of their own families” and some women, as the report states, were escaping abuse, poverty, incest and alcoholism.

It is also acknowledged that treatment of the women by their families was “contributed to and condoned by the institutions of church and State”. But surely that is an unreasonably tame assertion?

Who engineered and promoted the culture that made “immediate families” act so uncharitably? Surely there are clues in the vitriol that emanated from the altar.

The violence of the language used about these women was remarkable in its unvarnished hatred. This was not just about the moral parameters of an infant State, but about power alliances built from the 19th century and an Irish Catholicism that demanded conformity, promoted puritanism, displayed an inhumane rigidity and was preoccupied if not obsessed with status, sexual sin and a bleak view of salvation.

While the new state that emerged was not a theocracy, Catholicism was, according to Vincent Twomey, “effectively transformed into a civil theology”.

Fear and admonishment created scapegoats. The Catholic archbishop of Tuam in the 1920s, Thomas Gilmartin, declared the “future of Ireland is bound up with the dignity and purity of Irish women”.

That was a huge responsibility to bear and perceived transgressors thus had far to fall. These women did not immaculately conceive, but of the fathers the report asserts: “most are anonymous. . . they commonly disappeared . . . others denied paternity. . .many emigrated.”

We have become accustomed to hearing of “dark shameful chapters”. The cumulative content of various reports suggests something more embedded and systematic; an unfettered power by the church that was grossly abused and a compliant, deferential State.

Snobberies, rigid class hierarchies and poverty also played their part but to primarily blame those outside of the institutions of church and State is problematic. One witness recalled a girl dying in a mother and baby home during childbirth and that “the girls’ parents would not take her home, even in death”. Just what made parents think like that?

We need to be conscious of the context, expectations, and values of times past. Discourse about public health and sexuality was often stymied and censored. But what is most striking is how “sorrow” was replaced by aggressive misogyny directed towards those who supposedly compromised the official narrative of national and moral virtue.

It is so cruelly ironic that the concerted and co-ordinated efforts to avoid “public scandal” created the greatest scandals of all.