Knock Airport is well used to VIPs. Pope Francis is just another one

Knock Airport is now a thriving regional hub, and business is the holy grail 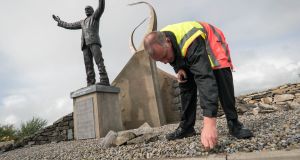 In the small convenience store in the terminal building of Ireland West Airport – Knock to you and me – there’s a modest book section which those intending to travel can select from as they begin their journey eastwards.

Among the titles on offer is The Pirate Queen – the Life of Grace O’Malley by Judith Cook. It tells of the 16th-century pirate queen of Ireland, a fierce rebel who fought off foes on land and especially at sea, leading men into battle and bowing to no one. A leader, a mother, a remarried divorcee.

Some 400 years after her death O’Malley’s home county is laying out the red carpet again for the head of the male-dominated Catholic Church which some would argue has changed little in those four centuries since. What would she have made of it all?

On Sunday morning Pope Francis will land at Ireland West Airport and his Aer Lingus aircraft, one of two laid on by the national airline in case anything goes wrong with the first, will pull into a special section of the runway reserved for VIPs.

Former vice president of the United States Joe Biden was here last year, and the likes of Rory McIlroy and various American actors have touched down over the last 12 months.

Heads will bow, applause will pierce the quiet Mayo hillside and 100 local schoolchildren will frantically wave their yellow and white flags before the pontiff is whisked away down the N17.

The road to the Knock Shrine will have been closed since the evening before. He’ll travel in a cavalcade of at least 15 vehicles, and an estimated crowd of 45,000 will wait to welcome Francis in Knock village.

For the staff at the airport preparations for the pope’s whistle-stop visit have been ongoing for months now.

“We must have had 100 meetings at different stages with different agencies,” explained one employee.

Down at the VIP hangar, overlooking Croagh Patrick and Grace O’Malley’s Clare Island in the distance, where the world’s media will gather to capture the moment the pontiff touches down, airport staff were busy ensuring all was in hand this week.

On Thursday a full dress rehearsal will take place involving the multitude of state agencies and security services. Every step will be carefully choreographed. The Office of Public Works has compiled maps, the army will put 20 tents in place on the airport grounds to secure the perimeter, sweeps will take place all over the complex and nothing will be left to chance.

And every mortal entering the hangar will pass through the metal detector.

John McCarthy’s wife Mary has used the opportunity of the papal visit to hit the shops.

“We’ve been selected to meet Pope Francis when he’s about to depart for Dublin. So, Mary has purchased a few new dresses as she can’t decide which one to wear,” says John, who is head of operations at the airport. Incidentally, he’ll wear his “best Sunday suit”. His children Michael, Saoirse, Robyn and Ruby will also get to meet Francis.

“We’re really excited, sure it’s a once-in-a-lifetime opportunity. Hopefully now we get a nice family picture to put over the mantelpiece,” John tells me.

In the serenity of the control tower Mike Connolly doesn’t expect any issues in terms of landing the aircraft on Sunday morning.

“We’ve got category two landing equipment here so even if it’s a little foggy or misty it should be absolutely fine.”

Connolly, like the rest of the staff I meet, is cool as a cucumber. He’s in control of his patch and his feathers aren’t ruffled just because the man touching down happens to be St Peter’s successor.

“It’s a coup for Knock and for the airport and we’ve worked with the collection of outside bodies and agencies to make a plan for the pope’s safe arrival and departure. From our point of view the exposure we’ll get on a worldwide scale is the kind of thing money just can’t buy. It’s estimated that the worldwide TV audience could run into the many, many millions so we’re hoping this could impact Knock and the airport in a big way in relation to Pilgrimage Tourism.”

On the road leading from the N17 to the airport workers are sprucing the place up. New flowers have been planted and the smell of fresh paint can be caught when the wind changes direction but, so far, the build-up has been somewhat understated. There are no Vatican flags or messages from local politicians welcoming the 81-year-old Argentinean to the west.

That said, Mayo TD Michael Ring, the Minister for Rural and Community Development, will be waiting on the tarmac with the hand outstretched.

While the airport, the vision of Msgr James Horan, was built after Pope John Paul II visited Ireland in 1979, it now stands as a regional transport hub first and foremost. The visual religious trappings are few.

Even the Marian Shrine shop in the terminal building had the shutters down this week – though I’m told that was an unusual occurrence. There’s a framed picture of Msgr Horan in the prayer room, as well as one of Pope Francis, but the room caters for all religions and none.

You’ll find the prayer room to the right of the two pool tables and the Bob the Builder children’s ride which plays that irritating theme tune and rocks sporadically when you insert €2.

It’ll be business as usual in the main terminal on Sunday, with thousands of passengers coming and going on their commercial flights

With almost 800,000 passengers expected to use Ireland West airport this year, serving over 20 destinations and contributing €150million to the regional economy, its clear that business comes first.

Well-run, well-marketed and well-supported within the local community, Ireland West Airport, located some 20km from Knock, is a thriving business in its own right.

So, the visit of Pope Francis, though iconic in its historical context, is principally a PR opportunity.

It’ll be business as usual in the main terminal on Sunday, with thousands of passengers coming and going on their commercial flights. Those using the airport must liaise with the local Garda to facilitate entry and movement in the area which will be severely restricted from the previous night.

One worker at the airport joked: “I’m not sure if I’m looking forward to him [the pope] coming, to be honest – because of the visit I will have to work a much longer shift that day.”

The majority of airport staff will watch the pope’s visit on a TV screen – though heads will be strained to see if they can spot his aircraft emerging from the clouds in the mid-morning.

Just another VIP in an airport which has grown very used to welcoming some of the best-known faces on the planet.