Welcome to the Liberties: New students get a taste of inner city Dublin life

In an effort to integrate newly arrived students into Dublin's Liberties, local historians James Madigan and Liz Gillis, with the co-operation of Champlain College in Vermont, bring them on a "meet the shopkeepers" tour of Meath Street. Video: Kathleen Harris 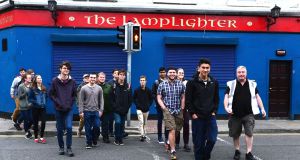 American students walking the Liberties with cultural officer James Madigan during a tour of the area. Photograph: Cyril Byrne

The most “awesome” thing about the greengrocer and butcher shops on Dublin’s Meath Street, says Will Botto (20), is the fact they are there at all.

“I come from a small town in New Jersey. You wouldn’t see a grocery store or a butcher like that. It’s all big supermarkets. I come from a big cooking family – they’d love that. I love it,” he says.

The student of computer and digital forensics is one of 42 young people studying at Champlain College, Vermont who have just arrived in Dublin for a semester at the university’s Dublin campus.

They are also the first “batch” of students to move into the purpose-built student accommodation, on the site of the old Frawley’s department store on Thomas Street. Almost all its 257 rooms are booked up from next month, with rents for single rooms around shared kitchens and living spaces, ranging from €205 to €280 per week.

In an effort to “get them before they start bad habits – like shopping in the supermarkets,” local historians James Madigan and Liz Gillis, with the co-operation of Champlain, have just brought the newest locals around the Liberties thoroughfare on a “meet the shopkeepers” tour.

Madigan estimates accommodation for about 1,500 students has been provided in the area since 2016, with a further 1,000 bed spaces on the way.

“And what we’ve found is they are not shopping in the local shops. They are going to Lidl and Poundland and not meeting any of the locals, not being part of the community. There is a very strong sense of community in the Liberties and we want to keep that.”

There has been “nervousness” among locals about the large numbers of students coming into this historic, working-class area.

“The thing is, our problem is not with the students. The main issue though is we want more social housing. So we don’t want a ‘them and us’ situation growing. We want to show them the community we love and hopefully they will love it too.”

First stop is Foley’s Pharmacy, which pharmacist Sean Foley has run for 35 years. He tells about the history of chemist shops in the area, citing in particular the work of Harry and Louis Mushatt – Lithuanian brothers who made remedies and preparations for people living in tenements from the 1920s. He knows everyone who comes into his shop, he says.

“The Liberties is really a village. Around here, it’s not about money. It’s about community. Welcome to the Liberties.”

After Darren and Dave’s fish and poultry shop, where fresh plaice fillets are now two for €1, the students visited Norton’s greengrocer, open since 1946. Then Noel’s Deli, where Noel Flemming (55) describes the Liberties as “the greatest spot on earth” before handing out sausage rolls – “still warm” and declared “really good”.

Asked, after the visitors have left, about locals’ feelings about the numbers of students moving in, he says they are “mixed”.

“On the one hand some of the older people, who have grown up here, been here generations, they’re a bit apprehensive. But others are excited. Young people bring life to an area, and hopefully they’ll shop in the area too. It’s about keeping small businesses like this one, going.

“If we have a problem with anyone it’s Dublin City Council who aren’t prioritising the homeless or the people living here who need housing.”

Across the road in the Lark Inn, a pub Mr Madigan says has the “perfect balance between respectability and lunacy”, barman Dave Maher invites the young people to try the weekend live music sessions at weekends. Again, after they leave, he speaks of his concern that, so far, the new students “don’t integrate”.

“We don’t see any of them in here. We get a few in from NCAD (National College of Art and Design on Thomas Street) but that’s it. It is a pity.”

Also visited are Catherine’s Bakery and Cafe, St Catherine’s Catholic Church and a number of street-traders on Thomas Street.

Mackenzie Marsocci (20), from Burlington, Vermont and studying cyber-security, “absolutely loved” the tour and will “definitely shop in local stores” over the next four months.

Mr Madigan is pleased with how the first, of what he hopes will be many, “meet the shopkeepers” tours, went. “We all just want the Liberties to thrive and be seen in a good light. Hopefully now, because we’re all in love with the area.”