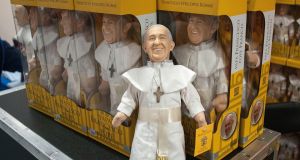 Items on display at the World Meeting of Families at the RDS. Photograph: Dave Meehan/ The Irish Times

So said Patrick McCrystal, the executive director of the Knock-based Human Life International (Ireland), next to the stand as he exchanged money with a purchasing pilgrim at the RDS in Dublin.

“Young people were hungry for the truth,” he said, to explain the popularity of the books.

Chapter 14 of the first book, the “N” chapter, warns men that the “very last person you want to select as a wife is a narcissistic woman”.

“The self-centred, self-absorbed and self-admiring woman is searching for a husband to orbit her over-sized ego, and you don’t want to be that man,” the book says.

Outside the Catholic Church’s global convention, it was the church’s failure to make gay people feel like they were family too that generated the most noise on the second day of a congress.

Former TV3 political correspondent Ursula Halligan brought a splash of colour and courage to the RDS to appeal to the church to drop its “wrong and anti-Christian” exclusion of LGBT-plus groups.

“If the church is serious, it needs to change its theology. It needs to recognise LGBTI families as real families,” Halligan told reporters.

Inside, asked about whether the meeting was inclusive of same-sex families, McCrystal said he knew LGBT people “living the Catholic Church’s message” – they were being chaste, he said.

Elsewhere at the congress, others – lay people rather than clergy – showed greater flexibility around what constitutes family, particularly in the darkest times in their lives.

Olive Foley, wife of the late Munster rugby coach Anthony Foley, spoke powerfully about the “family of sport” – the players her husband coached and played with and against – that embraced her and her family in their grief after his sudden death in 2016.

Her speech brought a packed hall to their feet in applause and tears to the eyes of Foley’s former teammate Ronan O’Gara, who spoke after her.

In the main RDS arena, after setting out eight key preparations for a good Catholic marriage in his keynote address, Cardinal Vincent Nichols, Archbishop of Westminster in England, speaking to The Irish Times, stressed that “people who live with a same-sex experience” were made to “feel at home in the church” but made it clear that there was no place for them within the Catholic definition of marriage.

He declined to comment on the organisation of the pastoral congress and its rejection of LGBT groups setting up exhibits.

Married Co Meath couple Cathal (39) and Aveen Reilly (38), who spoke about family and faith on the main stage after Cardinal Nichols, said afterwards that they felt the church had become more open to other types of families, including same-sex couples.

“The priests we met today, they seem more acceptable to everyone because families have changed, and there are all types of family situations,” said Aveen.

She pointed out she even saw an older couple head off to hear Fr James Martin, an American Jesuit priest deliver a speech about how the church could be more welcoming to the LGBT community.

“It was a fantastic example that they did,” she said.

Fr Martin told pilgrims that that community had often been treated like “lepers” within the church and urged Catholics not to reduce gays and lesbians “to the call to chastity we all share as Christians.”