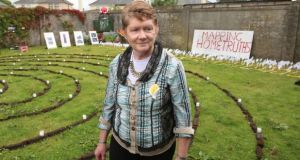 Catherine Corless has expressed surprise that its report may not be published for sometime yet. File Photograph: Joe O’Shaughnessy

Catherine Corless, whose work in Tuam Co Galway led to the setting up of the Mother and Baby Home Commission, has expressed surprise that its report may not be published for sometime yet. The Commission’s 4,000 page report is due to be presented to Minister for Children and Youth Affairs Roderic O’Gorman on Friday.

“They say it could be weeks before it is published, January, February, a lot of people didn’t expect that,” she said. They were “very sceptical as to why it has to go to the Attorney General, the guards, whoever, before we see it,” she said.

“The Commission’s job is to find the truth. I don’t understand why it has to be vetted, and take so long to do so anyway. Why can’t they get a team together, two or three, to speed things up. It’s all very disillusioning really,” she said.

Ms Corless, a local historian, had established that 796 children died in the Tuam Home with indications some may have been buried in septic tanks on the site. This sparked a national and international furore which let to the establishment of the Mother and Baby Home Commission in February 2015.

She herself met Commission chair Justice Yvonne Murphy in Tuam, at the outset of the Commission’s work in 2015. “I brought her around the site (of the Tuam Home and where some remains of children had been found). I told her about my suspicions as well. I also gave her a copy of my work,” she said.

“It was a closed door after that,” she said, “ with no more input after that. There was no further communication from the Commission and none about the interim reports either. People have been waiting five years.”

She recalled how when she went to various local authorities with what she had found out about the Tuam Home there was no interest. “I got no response from the Archbishop, none from the Bon Secours (Sisters, who ran the Home) or from Galway Co Council. It was tough at the time,” she said.

In 2014 she went to the media. “The media took a hand and that got to the Government. I was getting nowhere and it took off from there. That’s why I’ve gone to the media since, to keep up the pressure,” she said.

Chaired by Justice Murphy, the other Commissioner are former Professor in Irish History at UCD and President of the Royal Irish Academy, Prof Mary Daly, as well as former Professor of Law at TCD and member of the Law Reform Commission, Dr William Duncan.

The Commission has already published five interim reports. The fifth such report, published in April 2019, found that many of the children who died in the Tuam Home were buried in underground structures with 20 chambers built within a large decommissioned sewage tank.