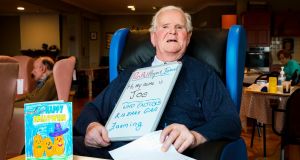 Nursing home resident Winnie Jeaney says she became “depressed” during the initial lockdown earlier this year but that having a pen pal has been a great way to “keep my mind active”.

Ms Jeaney, aged in her 60s, has been a resident at Craddock House Nursing Home in Naas, Co Kildare, for the last eight years. She, along with 24 other residents, is taking part in a new PenPal Ireland initiative, launched by wedding organiser Stacey Fiat (29) last week.

Ms Fiat’s programme pairs nursing home residents with pen pals and Craddock House is one of the first who has agreed to take part. Seven nursing homes have signed up to date along with 9,000 pen pals.

Ms Jeaney, who tested positive for coronavirus but was asymptomatic, had already been writing to local school children and members of the community in recent times.

“We have sent out a good few letters now and are waiting on our returns. I’ve already got one return, I got that yesterday,” she told The Irish Times. “The girl wrote and said she had just moved to Johnstown and that she had heard that I was knitting and crocheting and that I had an interest in that. I just said what I liked to do and what it was like in here, that sort of stuff.

“It’s great and you’re trying to think of what to say . . . It was very difficult there in the beginning because we all got depressed. I particularly got depressed and I was saying that we’ll never get out again.”

Ms Jeaney, who is originally from Sallins, was regularly visited by her sister prior to the virus and hasn’t seen her in more than four weeks due to the latest restrictions.

“She rings me now and I ring her,” she said. “Other residents have found it just as bad as I have.”

Speaking of her experience with the virus, Ms Jeaney said: “I didn’t know I had it. I didn’t have any symptoms, there were no problems. The nurse just told me I had it. I feel grand now, it’s hard to kill a bad thing.”

Ms Fiat said she decided to set up the initiative after seeing an article online about a similar programme in a Co Down nursing home. “They put up photos of the residents receiving their letters and the big smiles on their faces,” she said.

“I wanted to get involved somehow and did some research and decided to start something myself, not expecting to get the incredible reaction that it has gotten.

“I got an email from a nursing home in Athy last night saying some letters had been arriving and that there was great excitement. That was really nice to hear.

“We’ve a lot of teachers looking to get their class involved. We have people in their 60s or 70s living alone looking to get involved, people who have lost grandparents and would like that kind of figure in their life, Irish people living in Dubai, Australia or the US.”

“The residents are delighted, absolutely thrilled. We’re in lockdown now so there’s very little contact with family and the joy of receiving a letter for an elderly person always brings good feelings,” she said. “They love it, hearing about other people’s lives, what they’re into, what they might be doing for Halloween.

“Residents write back and we have a team of five co-ordinators so the residents can dictate it and we’ll write it if they need to.

“We’ve given Stacey a small blurb about each resident and she pairs them up with people from the wider community who are interested in doing it.”