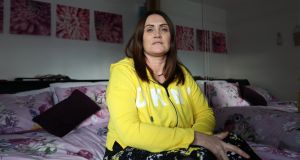 Sinéad O’Brien still becomes upset when remembering isolating with her family – including her husband and two children – for 14 days in March in their small inner-city flat.

O’Brien, a ward clerk at St James’s hospital, tested positive for Covid-19 just after St Patrick’s Day. “It was like getting hit by a bus, I was so unwell. It knocked me for six.” The family had to isolate for a fortnight.

“It was actually the most horrible time of my life. I couldn’t leave that room. I couldn’t even go to the front door. All I had, for fresh air, was to stick my head out the window.”

Their flat, in the 1937-built Marrowbone House flats complex in the Liberties, is on the second floor, its front-door sharing a balcony with seven other households.

“Then there’s the balcony over us, another under us, and the ground floor too,” says O’Brien. “I couldn’t go out of the room, or out on the balcony. There were too many people around. It felt like the walls were closing in. I was so sick and so frightened,” she says, becoming emotional. “And I was worried about my children. It definitely affected my mental health.”

For the past five years, she says, the family has been “fighting for a transfer” to a three-bedroom flat on a ground floor.

“My husband had a hip replacement and he finds the stairs difficult. The council just keep saying I am at ‘such and such’ a place on the list and there’s hundreds ahead of us.

But now I feel, let it be. What can we do? We just have to get on with it

“There is not a bit of privacy for any of us. We have no space to keep anything. The kids can’t have their music on. It’s very stressful.”

The pandemic has exacerbated the cramped conditions.

“You just feel like everyone is on top of you, from people living underneath you, to the people on top. You can hear every foot-step and it gets in on you. It would have never bothered me six months ago but, because of Covid and feeling you can’t get out, you can feel desperate.”

Asked how she feels about Level 5, she says she has cried at the announcements of restrictions in recent months. “But now I feel, let it be. What can we do? We just have to get on with it.”

Nearby are the Oliver Bond House flats, built in 1936. While well-designed for their time, they were not built for a modern pandemic.

The 397 flats are in 16 four-storey blocks. The average two-bed is 47-53sq m, far smaller than the mandatory 73-90sq m minimum today. Many are overcrowded, with little ventilation or storage space. During the first lockdown, residents suffered an infestation of rats – an issue that has not yet been eliminated.

There are two tiny playgrounds and no gardens. The only green area nearby is a small grassy patch at St Audoen’s Church.

Resident Lisa Carey describes as “awful” the anxiety felt by her son, a warehouse operative, and his girlfriend. “They are both losing their jobs again this week. It’s two months before Christmas and people with kids are expected to live on €300 or €350 a week,” she says referring to the pandemic unemployment payment. “People need more support.”

I’m in a two-bed with the kids. Two have learning difficulties and it was so hard

A young man who shares a two-bed flat on the ground floor with his partner, daughter (3) and mother has not returned to work in construction since March.

“My mother has COPD and is on oxygen 16 hours a day. The way things are with the virus I couldn’t be taking public transport all over the place. I could be in Ballyfermot today, Blanchardstown the day after. My wages were about €500 a week, so I really do feel it.”

“I’m in a two-bed with the kids. Two have learning difficulties and it was so hard. And the homework – it was okay for about two weeks, but then just too stressful. It was very hard trying to keep them in the flat, trying to explain why they couldn’t go out to play with their friends.

I have arthritis all over. I am okay, only for the constant pain all the time

“Level 5? I think I can cope as long as the schools stay open,” she says – a sentiment echoed by many in the complex.

Isolation is a fear for Nora Dodd (93), Oliver Bond’s oldest resident, who has lived in her fourth-storey flat since 1958. She “can’t go out at all” since she broke her hip three years ago, she says.

She is a widow with four sons who, she fears, will not be able to visit under Level 5. A home-help carer comes daily, but it gets lonely. “I have arthritis all over. I am okay, only for the constant pain all the time. My family can’t come, but I have the best of neighbours.”

Widower Christopher Carey (71) describes himself as “very positive”. It was “frustrating not going out” in March. “It does be lonely, but we’ve got to go with it. If we don’t do it this will go on for ever.”

While all who speak to The Irish Times say Level 5 is necessary, weariness, resignation, some irritation with restrictions and fear are apparent, too.

Close to the edge

Austin Campbell, executive director of the local Robert Emmet community development project, says during the first lockdown, job losses and the closure of schools and after-school clubs (where children are fed) saw demand for free food increase from 240kg a week to two tonnes a week now, distributed by volunteers.

“It really underlined to us how close to the edge many families are and the relative lack of socio-economic resilience” of many in the face of the pandemic. He worries poverty and mental health issues will worsen in a second lockdown.

Though there was great unity of purpose in March and April, the easing of restrictions over the summer has led to “some fraying in the local social fabric”, he fears. For some, further restrictions will inevitably be seen “as a greater threat than the possibility of contracting Covid-19”.

In the short term, he warns, the particular difficulties faced by poorer communities during this crisis must be met with adequate funding for community and voluntary services providing essential supports – such as food, home-help, counselling and educational supports.

In the longer term, decades of “bad planning, inadequate investment and neglect” must be addressed, he says, pointing to the lack of green spaces, dearth of community and sports facilities, overcrowded and dilapidated housing and an overconcentration of homeless hostels and hotels in the area.

One resident who sees a way through the coming weeks is artist Jimmy Leonard (62). Having been sent to Artane industrial school aged seven and been in and out of prison in the years after, he discovered art in Limerick prison. He is completing a master’s in fine arts at the local National College of Art and Design, and his third-storey one-bed flat in Oliver Bond is also his studio.

Dark grey and black charcoal sketches on his wall, expressing how he feels, are his latest work. “It seems the whole of Ireland is in a dark, heavy presence. Everywhere I go it’s Covid, as if there is no reality any more.

“But I am ready for this lockdown. I am going to get stuck in, paint my emotions. I’ll go for walks in the evenings, and get through it.”