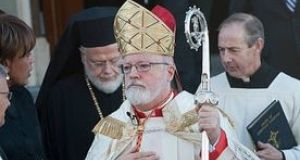 Cardinal Séan O’Malley: “Catholics have lost patience with us, and civil society has lost confidence in us.” Photograph: Getty Images

The chair of the Vatican’s Commission for the Protection of Minors has warned that “the clock is ticking” for the Catholic hierarchy when it comes to dealing with clerical child sex abuse.

“Catholics have lost patience with us, and civil society has lost confidence in us,” said Cardinal Seán O’Malley, who is Archbishop of Boston.

He said the church had yet to establish “clear and transparent systems of accountability and consequence for church leadership, whose failures have allowed these crimes to occur”.

Cardinal O’Malley has cancelled a planned trip to Dublin next week to moderate a World Meeting of Families discussion on Safeguarding Children and Vulnerable Adults. The decision followed allegations of abuse at St John’s seminary in Boston which, he said, required his “personal attention and presence”.

Separately, the Vatican expressed “shame and sorrow” after a Pennsylvania grand jury issued a 1,400-page report last Tuesday detailing cases of clergy sexual abuse in six of its dioceses over a period of 70 years. More than 300 priests were linked to the cases, with over 1,000 children identified as victims.

In a statement to be read out at all Masses in Boston this weekend, Cardinal O’Malley said “the crisis we face is the product of clerical sins and clerical failures”.

“As a church, the conversion, transparency and accountability we need is only possible with the significant involvement and leadership of lay men and women in our church, individuals who can bring their competence, experience and skills to the task we face.”

Meanwhile, the Catholic Primate of all-Ireland Archbishop Eamon Martin has said that any apology Pope Francis makes to clerical sex abuse survivors during his visit next weekend “needs to be more than ‘we’re sorry’.”

He said he expected the Pope to meet survivors of clerical sex abuse in Dublin.

Speaking to the BBC, Dr Martin said the pope “will try to express the grave sorrow of the church. But I think people want more than that.”

Meanwhile DUP leader Arlene Foster has declined an invitation from the Government to attend a State reception for the pope in Dublin Castle next Saturday.

“Mrs Foster appreciates the invitation but regretfully will be away with her family at that time,” a DUP spokesman said. “She particularly acknowledges the significance of this event for many Roman Catholics in both the Republic of Ireland and Northern Ireland.”

UUP leader Robin Swann will be at a Royal Black Preceptory demonstration in Larne, Co Antrim, but UUP MLA Robbie Butler will be attending in his place.

the Moderator of the Presbyterian Church in Ireland, Rev Dr Charles McMullen, has accepted an invitation to attend the reception. “Should there be an opportunity to meet Pope Francis in Dublin Castle, I would also very much welcome that in the context of building good relations,” Dr McMullen said.

He will also attend the Festival of Families in Croke Park that evening, at which Pope Francis will be present.