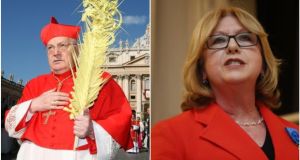 Pope Francis on Saturday accepted the resignation of one of the most controversial figures at the Vatican, Cardinal Angelo Sodano (92), Dean of the College of Cardinals for the past 15 years.

He had been Vatican Secretary of State from 1990 until 2005 and succeeded then Cardinal Joseph Ratzinger (now retired Pope Benedict XVI) as Dean of the College of Cardinals in 2005.

The Vatican said Cardinal Sodano was stepping down “because of his advanced age”.

The pope thanked Cardinal Sodano “warmly for the high service rendered to the College of Cardinals”.

He also said that from now on the post of Dean of the College of Cardinals will be held for five years, which can be renewed if necessary.

Last year, prior to the visit of Pope Francis to Ireland, former president Mary McAleese revealed that Cardinal Sodano tried in November 2003 to secure, through her, agreement that Ireland would not attempt to access church documents in Commissions of Inquiry surrounding the handling of allegations of clerical sex abuse then underway.

Describing the encounter as “one of the most devastating moments in my presidency”, it occurred during a State visit to Italy when she had a private meeting with then Vatican secretary of state Angelo Sodano.

“He indicated that he would like, and the Vatican would like, an agreement with Ireland, a concordat with Ireland. I asked him why and it was very clear it was because he wanted to protect Vatican and diocesan archives. I have to say that I immediately said the conversation had to stop,” Prof McAleese said.

“I told him I thought it extraordinarily inappropriate and very, very dangerous to the church, if it was pursued,” she said.

What worried her most was that there were then two statutory inquiries then under way in Ireland into child abuse involving the church, she said. The Ryan commission (the Commission to Inquire into Child Abuse), set up in 2000, was investigating the treatment of children in industrial schools, reformatories and orphanages, run by 18 religious congregations.

In March 2003, prior to her visit to Italy, the Ferns inquiry was set up, under retired Supreme Court justice Frank Murphy, to investigate clerical child sex abuse in Ferns diocese.

“What he [Cardinal Sodano] was asking for was an agreement between the Holy See and the Irish government under which church documentation would be protected by the church and the State would, clearly, have no access to it. That was what he seemed to be saying,” she said.

She was “gratified to say it never was pursued but I think the thinking is indicative of what did happen”.

Days after Prof McAleese spoke to The Irish Times on that matter in August 2018, former minister for foreign affairs Dermot Ahern told this newspaper that Cardinal Sodano sought an agreement in November 2004 under which Ireland would indemnify the Catholic Church against legal actions for compensation by clerical child sex abuse survivors.

“No one forewarned me. I was completely taken aback,” Mr Ahern said of the approach by the Cardinal. “ It was a very direct question. He wanted to know whether the Irish government would indemnify the Vatican against any similar claims in Ireland. He was as blunt as that.”

Mr Ahern told him that “on no account could I give such an undertaking and that it was a matter that would have to be decided by the government anyhow. I was very annoyed.”

Mr Ahern was in Rome to mark 75 years of diplomatic relations between Ireland and the Holy See, beginning in 1929.

Earlier, in the late 1990s, Cardinal Sodano is believed to have closed down Vatican investigations into notorious child abusers Cardinal Groer of Vienna and founder of the Legionaries of Christ Fr Marcial Maciel. Both, now deceased, were later removed from ministry.