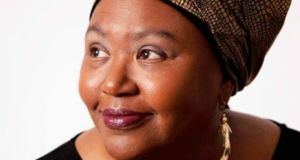 Irish Rail has apologised to a married lesbian couple after they were asked for proof of their marriage or civil partnership to buy tickets.

Mary McNally, who qualifies for free travel as a pensioner, and her wife Karen Underwood were looking to get a train at Heuston Station in Dublin to Cork.

While they were at the ticket booth, Ms McNally was asked to prove that they were recognised by the State as a couple.

Ms Underwood, who is originally American and a soul singer, said she was angry about the request and that it would not have been asked of a heterosexual married couple.

“It became an equality issue the minute he asked us for that. Mary is a different generation to me. I’m 56. I suppose for me because I’m a professional singer I’m in the public eye a lot, plus I’m black.

“Coming from Chicago, I refuse to live a life of oppression for anybody. The minute she was asked for proof of civil partnership – though we are actually married – it became an equality issue.”

The couple have been together for more than two decades. They entered into a civil partnership in 2012 and were married shortly after the 2015 referendum on same-sex marriage was passed.

“If we were a husband and wife would we be scrutinised to the same extent? It’s a knock on your self-esteem and your equality. We don’t carry proof of our marriage in our handbags. We were flabbergasted by what happened,” Ms Underwood said.

Irish Rail has issued an apology after the issue was aired on Cork 96FM radio station. It said the incident was an “isolated one” and should not have happened.

“No it is not [standard practice], and we apologise that the customer was asked this. Our booking office staff are required to issue tickets according to the free travel pass validity, which in this instance was two tickets,” the company said in a statement.

“Our revenue protection officers who travel on board may verify directly with the Department of Social Protection that free travel passes are valid and that a person travelling on a spouse/partner ticket is entitled to do so, but in no circumstances should a customer be asked for proof of marriage or civil partnership.”

Ms Underwood said the issue of proof of validity could be resolved if every person entitled to a free pass carried with them ID which could state that they were entitled to travel with their spouse.