‘Nobody is listening, they keep building dormitories,’ says homelessness campaigner 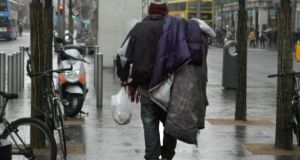 When asked his hopes for 2019, Fr McVerry replied: “To go out of business.”

Homelessness campaigner Fr Peter McVerry says the Government should be building more homes not hostels to address the homeless crisis.

“Any 12 year old can tell you that the current strategy is not working,” he told the Pat Kenny show on Newstalk.

Any business that kept getting worse results every month for two and a half years would know that their business plan was not working, he said.

“They should be building more homes not hostels which are only a solution for the problem of rough sleepers.”

Fr McVerry said there is a need to respect the privacy and dignity of homeless people. He called for the provision of single rooms for people accessing services.

“Nobody is listening, they keep building dormitories. That’s a political solution so they can say beds are available, but people don’t want to use them.”

He said that the most frequent complaint he got from people is that their personal items had been stolen. People were reluctant to sleep in dormitories because of problems with drink and drugs.

He said it was obscene to have buildings sitting empty in the middle of a crisis. He did not understand why Compulsory Purchase Orders (CPOs) could not be used to return the buildings to use as homes.

CPOs had been used to acquire land for the building of a ring road around Galway, he pointed out, but they could not be used to purchase empty houses. He asked why that was.

The budget for the Fr Peter McVerry Trust in 2018 was €28million, he said, €8million of which they had to raise themselves. For 2019 it will be €33million of which €20million will be provided by the State and the remainder will be raised by the organisation.