Students from Belvedere College, Dublin take to the streets in their annual sleepout fundraiser in aid of the homeless. Video: Sorcha Pollak 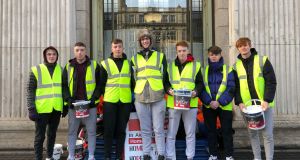 The echo of young male choral voices mixed with the rattle of coins in plastic buckets on Dublin’s O’Connell Street on Saturday, as dozens of teenage boys gathered for the annual Belvedere College Christmas sleep-out.

The sleep-out is now in its 35th year and involves 16-18-year-old students from the Belvedere College Dublin boys’ school spending two nights sleeping on the streets of the capital, while collecting money for those without a home at Christmas.

This year, more than 100 students, teachers, past pupils and parents from the school will take to the streets for the sleep-out.

On Saturday, fifth- and sixth-year students from Belvedere spread out across the city centre decked out in high-vis vests and clasping large buckets to collect donations for Focus Ireland, the Peter McVerry Trust and Home Again, before the first night of the sleep-out.

Outside the GPO, younger students from the Belvedere school choir joined members of the High Hopes homeless choir to sing carols as Christmas shoppers dropped coins and notes into collection buckets.

Cormac Yelloway, a 17-year-old sixth-year student, is taking part in the sleep-out for the second time. He joins the more than 80 students who will spend the coming days collecting money for the three homelessness charities and sleeping outside the GPO and on College Green.

“Obviously we’re never going to fully understand what it’s like to be homeless but sleeping out, and there’s an optional 24-hour fast that some of the lads do, gives us an appreciation for how lucky and privileged we really are. For a lot of the lads it will be their first interaction with homelessness so it’s a learning experience.”

“Homelessness is the worst it’s ever been,” he adds. “In November there was a child becoming homeless every four hours. Peter McVerry calls it a national emergency, a crisis, and that’s exactly what it is.”

Mr Yelloway says the homeless people the students encounter over the three-day collection period are grateful for the support, but many express frustration at their situation.

“I think it would be such an awful waste for us not to do anything with this privilege and to not try and put change into action.”

Harry Hamlett Maguire (17), from Drogheda, Co Louth, is taking part in the sleep-out for the first time. He’s also been running the social media coverage of the collection, using #SleepOut18 to publicise the event. “People have been responding really well online and we’ve had a strong online presence, with people sending sleep-out selfies to help support our cause.”

Fiachra Tuckey (18), from Balbriggan, Co Dublin, will also be sleeping out for the first time. “We’ve been told it will be cold and hard to sleep, but I’m looking forward to it. It’s a big tradition in the school and there’s a lot of history in it. It gives you an idea of what people go through and it’s a great cause.”

Nearly 10,000 people will be homeless as they celebrate Christmas this year, of whom 3,725 are children living in hotels or homeless hubs. Focus Ireland said it assisted about 15,000 people who were homeless or at risk of losing their home in the first 11 months of the year, up from 13,500 in the same period in 2017.