‘Everyone is friendly’: Ballaghaderreen and the refugee crisis 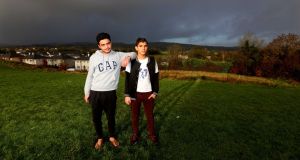 Bashar Samiz and his cousin Yamen in Ballaghaderreen: locals have won national and international plaudits for their response to refugees.

Bashar Samiz got to play chess when his fifth-year classmates at the Abbey Community College in Boyle, Co Roscommon, were doing their Christmas Irish exam but they didn’t resent it, or at least not too much.

The 17 year old , prompted by a teacher, had already given them a potted history of his life . Orphaned at 11 when a bomb destroyed his family home in Damascus, killing his parents, his two brothers and sister, he was only 13 when he found himself in Istanbul sewing wedding dresses to survive.

An aunt had taken him to Turkey where, he explained, “if you don’t work, you don’t eat”. His next adventure was a “scary” six-hour journey to Greece in an open boat packed with 40 people.

He came to the Emergency Reception Orientation Centre (EROC) in Ballaghaderreen with his new family, his uncle Khalid Alhambra, aunt Khadijah and their five children, about nine months ago, and they recently moved to Boyle.

Bashar and his cousin Yamen (13), who was regarded as a handy goalkeeper on the under-16 GAA team in Ballaghaderreen, started school in Boyle two weeks before Christmas. They may not have mastered Irish yet but they do speak Greek, Turkish, Arabic and already their English is so good that evading that exam was not an option.

The family love their home in Boyle with its view of the Curlew mountains. Visitors are warmly welcomed with tea and plates of assorted nuts.

“Everyone here is friendly. They always try to help if you have a problem,” said Bashar.

In the past two months, 120 people have moved out of the centre in Ballaghaderreen, each departure a source of joy for those leaving but a bitter-sweet reminder for those left behind, that their friends are getting getting on with their lives but they have no home yet.

Pat Byrne, an ex-Army man who also served on a number of EU Common Security and Defence Policy (CSDP) missions in different trouble spots, has been manager in the centre since September. He says that after each departure the mood among those remaining is “a little bit subdued for two or three days”.

A recurring criticism of the facility was that some residents had to wait for up to a year to be rehoused and, with their lives in limbo, boredom and constant worry about relatives left in Syria made for stressful lives.

In recent weeks the process seems to have sped up and, by the time the Christmas tree went up , only 51 residents remained. But staff have been busy because on Thursday they welcome 105 new arrivals, made up of 22 Syrians families who have been living in camps in Lebanon and have been identified as vulnerable by the United Nations High Commission for Refugees.

Some residents had to wait for up to a year to be rehoused and, with their lives in limbo, boredom and constant worry about relatives left in Syria made for stressful lives

They fly into Knock in the morning, said Byrne. “We will have lunch ready for them when they arrive . There has been a lot of activity here preparing for them and we have all the rooms painted now,” he said. “God knows what they have been through.”

According to the Department of Justice, 373 people have passed through the Ballaghaderreen centre since it opened in the converted Abbeyfield hotel in March 2017, and 322 of these have now been housed.

While the people of Ballaghaderreen have won national and international plaudits for their response to the refugees, criticism of the official response lingers.

Micheal Frain, Ballaghaderreen’s chief fire officer and chairman of Roscommon Leader Partnership, says the arrival of the Syrians will in time be seen as “a turning point for the town” which thanks to the goodwill of the people, rather than good planning by the authorities, has benefited both the locals and those looking for sanctuary.

“It has worked out very well. This time last year there was a bit of a hullabaloo around the county about where Syrians were going to be resettled, but that was a storm in a teacup,” he said.

There are now 19 Syrian families settled in Ballaghaderreen, Roscommon town, Athlone, Castlerea, and other parts of Co Roscommon, some of them recently arrived from other centres like Mosney.

Saj Hussain, a Pakistani-born barber and current chairman of Ballaghaderreen Tidy Towns committee, has been one of many locals to befriend the Syrians, regularly interpreting for them, and organising soccer and cricket games .

“The first thing they ask when they find out the name of the town where they are going is if there is a Lidl or a Penneys there because they don’t have much to spend,” he said. Phone credit is always a priority, he says, as people need to stay in touch with home.

“A lot of people have lost family in Syria since they came, so sometimes they are very sad,” he explained. And while the Syrians have had mostly positive experiences, he knows of one woman coping with the news that two brothers were killed in Syria since her arrival who was not made welcome when she moved to a town in another county.

Phone credit is always a priority, he says, as people need to stay in touch with home

“People spat at her and, called her bad names and they threw stones at her window,” said Saj.

In Ballaghaderreen, so many in the community took a different approach that Micheal Frain has been interviewed by a New Mexico-based journalist wondering why one country builds a wall to keep refugees out, while in another locals play football with the newcomers. He has also been quizzed by Government officials, about how they could replicate the Ballaghaderreen experience elsewhere.

Ahead of the new arrivals on Thursday, Minister of State for Equality, Immigration and Integration David Stanton said Ballaghaderreen had provided “a model that I would like to see embraced in communities right across the country”.

Frain said: “That is all well and good but we need other departments to step up and allocate funding.”

A longstanding gripe in Ballaghaderreen is the extra pressure put on the two family doctors in the town who were struggling to cope even before the Syrians arrived. Frain said that this is still an issue.

Responding to criticism, the Department of Justice said that families are screened prior to arrival, and that acute medical cases are not accepted.

Steps are being taken to provide extra cover for the new arrivals to ensure that additional pressure is not placed on services over the Christmas period, a spokesman added.

Frain wants Ballaghaderreen included in the next round of Rural Regeneration and Development funding , due to be announced in January.

A proposal to utilise many of the empty commercial units in the town for creative industries has been submitted. “Ballaghaderreen people have not been found wanting and deserve this,” said Frain.

Bashar Samiz, meanwhile, is hoping to go to college to study design and may even go back to making wedding dresses. His cousin Yamen is reaching for the stars. “I want to be an astronaut,” he said.