Protecting institutions over victims ‘not unique to Catholicism’ 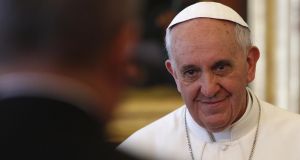 Pope Francis will visit the Republic this weekend for the World Meeting of Families.

Protecting religious institutions at the expense of victims of abuse is not unique to the Catholic Church, the head Imam at the Islamic Centre of Ireland has said ahead of the visit of Pope Francis this weekend.

Shaykh Umar Al-Qadri on Thursday welcomed the visit of the pontiff, and said he was a man the Christian community “should be very proud of”.

“Pope Francis has on many occasions followed the footsteps of his namesake, Saint Francis of Assisi, and reached out to other communities to build bridges,” he said. “He has reached out especially to Muslims and there have been many kind gestures.

“Ireland is undoubtedly a very different Ireland than the last Papal visit in 1979. The church has let many of its members down due to the scandals and the manner in which the church dealt with these scandals hurt many specially the victims.

“The mistake made by its leadership to protect institutions instead of victims is a mistake that is also made by some Muslim and other faith leaders when religious leaders exploit their position of trust and authority.

“It is important that concrete steps are taken by the Vatican to hold clerical sex offenders and those who protect them accountable for their crimes.

“Lessons should be learnt from the past and all religious communities must ensure that the most robust systems are in place so that such crimes can never happen.”