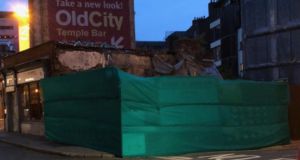 Netting used to cover the “Somebody’s Child” mural in Temple Bar on Wednesday night was put up deliberately in preparation for a new mural ahead of the Pope’s visit, Dublin councillor Mannix Flynn has confirmed.

The protective screening, which was installed by Mr Flynn and others on Wednesday, was pulled down overnight after a post on a widely followed Twitter account called on people to rip down the material. It later emerged that the cover was in fact protecting a new mural on the Exchange Street corner in Dublin’s city centre.

In a blog posted on Thursday morning, Mr Flynn clarified that the netting had been installed to prepare for a new mural which includes a message specifically targeting Pope Francis. He said the mural would have to be redone on Thursday after the protective material was torn down.

Mr Flynn criticised the Twitter user who posted an image “inciting people to tear down the protective netting”, saying the photographer never bothered to ask him what was going on.

“I appreciate the concerns of people who thought that someone was covering up ‘Somebody’s Child’ work and Disband the Artane Band panels but the person who took the image and put up the blog last night inciting people to tear down the protective netting never bothered to ask me, as I was on the site putting up the net, what was happening,” he said. “Instead, they chose to incite others to attack the site. This is all time consuming and costly.”

The “Somebody’s Child” mural was installed by Mr Flynn in November 2015 to remember the children and infants who died in the State’s Mother and Baby Homes. It lists the names of 796 children who were buried in the Tuam mother and baby home in Galway.

In January 2017 the mural was set on fire in an act of vandalism and restored a few months later with a new piece of artwork calling for the dissolution Artane Boys Band.

Mr Flynn said he monitors the site on a daily basis as it has been attacked “a number of times”. He added that Dublin City Council Planning Department had legally threatened to take down the artwork and that he would seek public support to keep it in place.

A spokeswoman for Dublin City Council said it could not comment on any planning enforcement cases that are ongoing.

Entitled “Signal”, the new panel will explain that “as a signal of the distress caused by the Catholic Church’s cover-up and denial of child sexual abuse, the Vatican State flag is being flown upside down”. The panels on the mural will depict “the lifelong suffering and anguish that clerical sexual abuse has left on the many hundreds of thousands of children, now adults, who experienced these crimes”.

“Over and over the Pope, the Vatican State, and the Catholic Church have denied us, abandoned us and betrayed us. We are left without hope.”

Work on the new mural began again on Thursday morning and is expected to be completed by the afternoon.

1 Three relatives dead after apparent murder-suicide in Kanturk, Co Cork
2 Woman stranded in Ireland due to pandemic has ‘miracle baby’
3 Almost 20% of staff at Dublin hospital have antibody evidence of Covid-19 infection
4 Cork suspected murder-suicide may have been over disputed will
5 Gardaí say 52 people who went missing in 2020 not yet found
Real news has value SUBSCRIBE