Exclusion of LGBTI people from WMoF ‘wrong and anti-Christian’

A Rainbow Choir made up of LGBTI singers along with journalist Ursula Halligan, gathered outside the World Meeting of Families in the RDS on Thursday 23rd August. Video: Ronan McGreevy 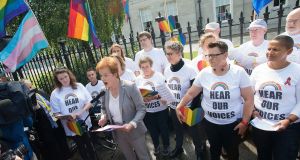 Journalist Ursula Halligan spoke before the performance of the ‘Rainbow Choir’, made up of LGBTI singers who gathered outside the World Meeting of Families at the RDS on Thursday, to sing in protest at the exclusion of LGBTI people and their families from the event. Photograph: Dave Meehan

Former TV3 political correspondent Ursula Halligan has called on the Catholic Church to ditch its language about gay people being “intrinsically disordered”.

Ms Halligan, who came out as a lesbian before the marriage equality referendum in 2015, led a protest outside the World Meeting of Families in the RDS against their exclusion from the gathering.

The Rainbow Choir had applied for a stand at the Catholic event, but received no response.

The choir sang two songs outside the RDS - Something Inside So Strong and We Are Family.

Ms Halligan said the exclusion of LGBTI families from the World Meeting of Families was “wrong and anti-Christian”.

An emotional Ms Halligan said she did not want young people to do as she did and come out when she was 53.

She described herself as a practicing Catholic who loved her Church, but that love was not reciprocated.

“Love is the most important thing in life. Why would you try and stump that in any human being?”

It was time for the Catholic Church to stop calling gay people “objectively disordered and intrinsically evil” in the official catechism, she suggested.

“They have to stop excluding us from occasions like this which celebrate the family,” she said.

“If the Church is serious, it needs to change its theology. It needs to recognise LGBTI families as real families.

“That will be a challenging thing for the Pope to do, but it will be the right thing for him to do. My LGBTI brothers and sisters are as real and as human as any other human beings. I have met many magnificent LGBTI families. Why aren’t they hear today?”

Had they been given a stand, she said they would have been able to talk to their “fellow brothers and sisters in the Catholic Church”.

“We would have been able to say, ‘look, we are not strange beings. We are human beings like you. We want to do good just like you. Please accept that humanity comes in all shapes and sizes. Leave it to God to judge. Anyone who acts out of love is doing good in life.”

She also praised former president Mary McAleese who has been vocal in support of LGBTI recognition within the Catholic Church.

“She has been a superb champion. She inspired me all the way. I think in time we will see her along the ranks of Daniel O’Connell and Charles Stuart Parnell.

“She has shown the courage I hope the Pope will show. She is doing the right thing. The right thing is always the loving thing to do. God is about love.”