Rector and priest embark on joint Christmas fast for charity 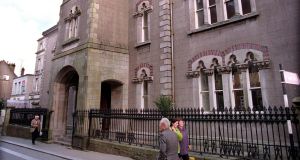 The two clergymen have embarked on a four-day charity fast outside historic St Iberius Church on the Main Street in Wexford town.

The pair had their last meal at 6pm on Friday and will not eat again until 6pm on Christmas Eve, subsisting on one paper cup of soup each day at lunchtime.

The annual fast, which was started 28 years ago by the late canon Norman Ruddock, has raised hundreds of thousands of euro for worthy causes. For several years, the fast has raised in excess of €45,000, with busy Christmas shoppers giving generously to the collection. A number of older people gave substantial amounts of money through the years, upwards of €3,000.

Rev Minion did his first fast eight years ago on his arrival in Wexford and was joined by Fr Marken four years ago. “I do remember one year a donation of €9,000 coming from one gentleman. We still have generous amounts coming in. Quite a number of people would give €200 or €300. You’d have people putting in a wad of notes and they would be very discreet about how they put it in the box. You wouldn’t see them doing it,” the rector said.

Rules of the fast

During the fast, the clergymen stand together on the steps of the church, chatting to contributors and well-wishers in the midst of the festive retail rush.

The rules of the fast allow the clergymen to drink water and tea or coffee with no milk or sugar; hot water with lemon, cloves and a small dip of honey, to maintain their sugar levels, and a small amount of Bovril for salt.

“It spoils your Christmas dinner because you become full after a very small amount of food when you start eating again,” said Rev Minion.

This year, they are looking forward to a visit by broadcaster Miriam O’Callaghan, who is due to drop by on Sunday afternoon to lend her public support.

“Miriam admires what we are doing and what it achieves,” said Rev Minion, who conducted the broadcaster’s wedding service to her husband Steve Carson.

The fast will conclude with an ecumenical carol service in St Iberius Church on Christmas Eve at 4pm, with members of the recipient charities and civic representatives doing the readings and prayers of the service.