Publishing, for John Mulcahy, was ‘a passion, not just a job,’ mourners told 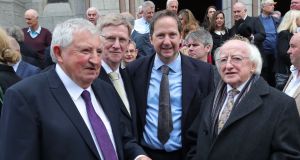 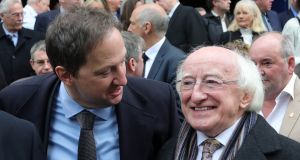 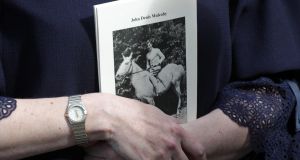 For John Mulcahy, journalism and publishing was not just a job or a career, it was his passion, his memorial Mass heard on Thursday.

Though ill for the past 18 months he was working on the latest edition of the Irish Arts Review weeks before his death last Friday, his son Hughie told mourners at a Mass in St Mary’s Church, Haddington Road in Dublin. At his request Mr Mulcahy’s body has been donated to the Royal College of Surgeons and will be cremated at a later date.

Leading figures of the arts, journalism and publishing, including the President Michael D Higgins and his wife Sabina, attended.

Hughie told mourners his father’s love of the arts was sparked by his wife of 61 years, Nuala, whom he met at a 21st birthday party in Howth, just before he was to move to Canada. She followed him to Montreal and they married in 1957. Their first son, Nicky, was born there.

John had his first taste of journalism in Canada writing for the Canadian Financial Times, “and he liked it”. The family returned to Ireland in 1960, settling in Mespil Road, Dublin, where they had five more children - Michael, Stephen, Natasha, Bridget and Jack.

In November 1968 Natasha died in a road accident, an event that had a “profound effect” on John and Nuala. Natasha is buried in a graveyard near Ballysmuttan, Co Wicklow across the valley from a family cottage.

Also that year John bought arts magazine Hibernia magazine, transforming it into “into a heavy-weight intellectual commentary on politics, finance, big business and the Church”. It was forced to close in 1980 after a libel action bankrupted it.

In 1973 the family moved to Ranelagh, where Hughie and Aengus were born.

John founded the Sunday Tribune in 1980 and in 1983, “from the ashes of Hibernia arose the Phoenix magazine” which deployed “wit, humour and parody to slice through hypocrisy, hubris and corruption”. In 2002, as a “labour of love” John bought the Irish Arts Review.

His greatest comfort was his family and at the “centre of his world” was Nuala. She was, said Hughie, “his partner, his foil, his strength, his joy”.

“He asked that we spread his ashes over Natasha’s grave...When we spread his ashes we will sing the song his mother sang to him as a child which includes the lines, “And if you come, when all the flowers are dying/And I am dead, as dead I well may be/You’ll come and find the place where I am lying/And kneel and say an ‘Ave’ there for me.”

He is survived by Nuala, his children and grandchildren.